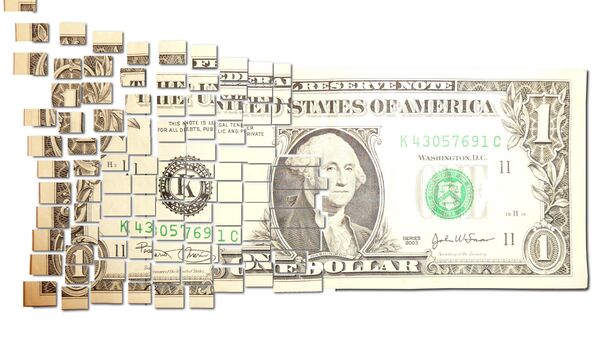 © Flickr / photosteve101
Subscribe
The US economy is teetering on the edge of a precipice and risks falling into a pre-Industrial Revolution economic abyss, while American "believers in the grand myth of perpetual growth" continue to delude themselves, Paul Farrell stressed.

"America Exceptionalism" implies a belief that our policies are superior, we're qualitatively different, our values are unique, we're the best in the world. Whether that makes us arrogant, delusional or just an out-of-control bunch of narcissists, new evidence does suggest that, at least in the global economic arena, competition from China and emerging nations has sapped America's exceptionalism."

Mr. Farrell referred to economist Robert Gordon of Northwestern University, who subtracts the economic impact of a series of disastrous "headwinds," including shifting demographics, stagnant educational achievement, rising income inequality, globalization, household and government debt, which are leading the country to near zero GDP growth.

10 years ago the US added to world economy 139% more than did China. China slowdown today? China 39% more than US pic.twitter.com/EF0iqrDXm4

Although the stocks have been rising since 2009, a market crash is now inevitable, Paul Farrell noted, citing Jeremy Grantham, a chief investment strategist of Grantham Mayo van Otterloo (GMO).

Mr. Grantham has suggested that the stock market bubble could burst just before the US presidential election or soon after, "collapsing from the current range of 18,000 down 50% to about 9,000."

Remarkably, the International Monetary Fund (IMF) and the World Bank have repeatedly warned the US about the impending financial disaster, anemic recovery and slow growth. Still, the economy is getting worse a lot slower than was predicted due to the Federal Reserve's market bubble.

Japan Dethrones China as Top Foreign Holder of US Treasury Securities
"The challenge for policy makers around the world is to combine the policies needed to boost today's growth with those fortifying tomorrow's prospects [because] while global growth is not bad, it's just not good enough," IMF Managing Director Christine Lagarde elaborated, urging policy makers to carry out necessary reforms as soon as possible.

Alas, the West has turned a deaf ear to Lagarde's statement, Paul Farrell remarked, adding with bitter irony that seemingly no one in Washington is "exceptional" enough to lead the reforms.

What make matters even worse is that central bankers and policy makers concentrate on short-term solutions, ignoring serious systemic long-term problems, he stressed.

The United States is "driving down the road to zero growth and painful austerity, like the 1930s," the expert pointed out, adding that the country's economy will not repeat the astounding GDP growth that it had enjoyed until the 1980s.

The American economy is teetering on the brink of collapse, while "believers in the grand myth of perpetual growth" continue to delude themselves, Paul Farrell concluded gloomily.