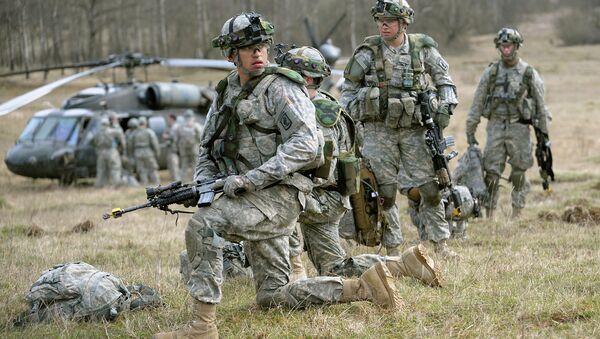 After marching into Yavoriv with a pledge to instruct the Ukrainian troops in defensive capabilities, the Pentagon is now openly admitting it will conduct ‘war-fighting’ training for the Ukrainian National Guard, accused of war crimes in the country’s east.

Nearly 300 soldiers of the 173rd Airborne Brigade arrived in Ukraine this week after a 1,100 mile march from northern Italy, during an operation known as Fearless Guardian. Starting Monday, April 20th, the paratroopers will begin training Ukrainian troops, a plan which will continue over the next six months.

But the Pentagon has now admitted that it will be engaged in overt combat training.

"We will be conducting classes on war-fighting functions, as well as training to sustain and increase the professionalism and proficiency of military staffs," Major Jose Mendez, operations officer for the brigade, was quoted by the US Army website.

"The training will help them defend their borders and the sovereignty," Captain Ashish Patel said, according to the site.

Specifically, the US Army soldiers will train the Ukrainian National Guard battalions. Reformed in 2014, they became the most active combat forces fighting with anti-Kiev militia in the country’s east. Its troops openly displayed far-right sympathies, brandishing swastika-like insignias, throwing Nazi salutes, and posing with Hitler portraits.

After the discovery of mass graves in the Donbass region, containing the bodies of more than 400 executed civilians and independence supporters, Ukrainian guardsmen were accused of war crimes and human rights violations.

Ukrainian military officials have also emphasized the fact that the Pentagon will be engaged in combat training.

"The Americans have enormous combat experience and will teach skills to our military that can be used in combat," Ukrainian army spokesman Andriy Lysenko told a news conference on Friday.

The exercises will begin on Monday, despite warnings from Moscow that Western meddling will only embolden the radical reserve units, and made a bad situation even worse.

"The participation of instructors and experts from third countries on Ukrainian territory…of course, does not help to resolve the conflict," President Vladimir Putin’s spokesman Dmitry Peskov told Russian news agencies. "On the contrary, it can seriously destabilize the situation."

Earlier this week, Canada also announced that it would deploy 200 troops to Ukraine to assist in the training exercises. The United Kingdom has already sent dozens of military instructors.

President Obama is also still considering the option of sending weapons to Ukrainian forces. While he has held back amid fears from allies that providing arms would only escalate the crisis further, some Ukrainian media outlets have reported that Operation Fearless Guardian will conclude with a US handover of ammunition stockpiles. American military officials deny those reports.