We Don’t Care About Your Deal: US States Set to Maintain Iran Sanctions 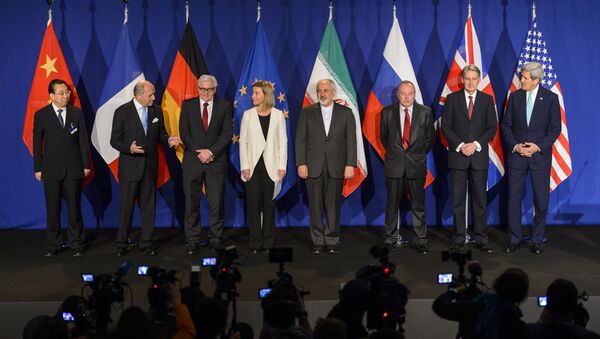 © AFP 2023 / FABRICE COFFRINI
Subscribe
International
India
Africa
As Iran and the P5+1 nations continue to pursue a finalized agreement in their nuclear negotiations, there could be a surprising new threat to international talks. No matter the federal government’s decision, nearly two dozen US states may maintain their own sanctions against Tehran.

The framework agreement reached by negotiators earlier this month was hailed as a major milestone in warming relations between Iran and the United States, longtime enemies. The deal still has a long way to go before it becomes finalized, but a key part involves the lifting of Western sanctions against Iran.

But many US states – especially those led by Republican legislators – may not play along.

Roughly two dozen states have, in the past, implemented their own legislation to financially punish foreign businesses which cooperate with the Iranian government. Divestment programs discourage companies from dealing with Tehran, and states can influence businesses by choosing which ones receive public contracts.

Signing a $1 million contract with the Islamic Republic could cost a company $10 million in contracts in Michigan, for example.

Florida, for instance, established the State Board of Administration to manage public investments. It summarily pulled $1.3 billion out of Russian and Chinese companies which also did business with Iran.

And many of those measures will remain in place, no matter the final outcome of the nuclear negotiations. Kansas and Mississippi may even adopt new restrictions.

"Our investment sanctions are not tied in any way to President Obama’s negotiations with the Iranians," Don Gaetz, a Republican state senator from Florida told Reuters. "They would have to change their behavior dramatically and we would not be necessarily guided by President Obama or any other president’s opinion about the Iranians."

While some states said they would consider legislative changes if a deal is finalized by the June 30 deadline, many echoed Senator Gaetz’s remarks. Lawmakers in Michigan and Georgia also told Reuters they had no intention of altering state sanctions, while officials in Illinois and Connecticut said any shift in policy would require new legislation.

Of the states contacted by Reuters, only New York and Oregon said they intended to follow the federal government’s lead.

Despite the fact that the sanctions were endorsed by the federal government when they were originally passed, many have already expressed criticism of the states in light of the new negotiations, pointing out that state governments have little expertise in global politics.

US May Reimpose Sanctions Against Iran if Nuclear Deal Violated - Obama

"Foreign policy is uniquely a case where the government needs to act with one voice," William Reinsch, president of the National Foreign Trade Council, told Reuters.

Such laws could also carry a double-edged effect, doing just as much harm to the states, and the US at large.

"The degree to which such decisions can be made at lower government levels than the federal government generally makes the United States a more complicated, unattractive place to do business," Richard Nephew, former principal deputy coordinator for sanctions policy at the US State Department, said. "This is a feel-good measure that, in the end, probably doesn’t feel all that great given the costs it imposes at home."

While the origin of these local measures have clear roots in America’s turbulent relationship with the Islamic Republic, Michigan state senator Marty Knollenberg traces his state’s 2008 legislation to the American Israel Public Affairs Committee lobbying group.

The final accord, if agreed to by all sides, would likely include the lifting of federal sanctions against Tehran’s oil sales, as well as the loosening of restrictions on Iran’s nuclear program and financial system.

This isn’t the first snag since the framework agreement was reached on April 2. Any deal will ultimately have be approved by the US Congress before it can take full effect, and many US lawmakers have threatened to nullify any agreement.

Israeli Prime Minister Benjamin Netanyahu has also showed fierce opposition to any deal which would allow Tehran to develop nuclear energy, telling President Obama that the negotiations "would threaten the survival of Israel."