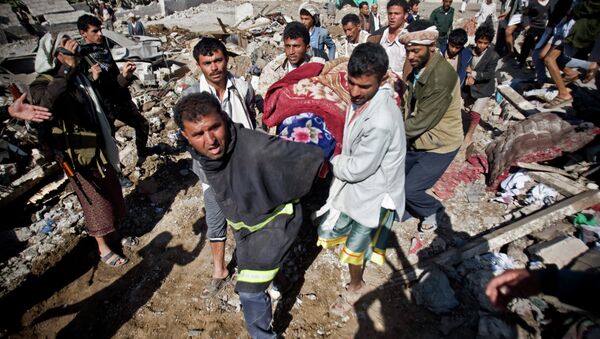 The United States is fast tracking the sale and delivery of arms to the Saudi Arabian-led coalition that has been bombing rebel Houthi positions in Yemen, government officials said Tuesday.

The United States will also step up the provision of  intelligence to the coalition, which began airstrikes against the Shia Houthi rebels on March 25.

"Saudi Arabia is sending a strong message to the Houthis and their allies that they cannot overrun Yemen by force," Deputy Secretary of State Tony Blinken told reporters in the Saudi capital of Riyadh.

"As part of that effort, we have expedited weapons deliveries, we have increased our intelligence sharing, and we have established a joint coordination planning cell in the Saudi operation centre."

The announcement comes the same day as a report that at least six children were killed Tuesday in a Saudi airstrike that hit a school in central Yemen.

At the Pentagon, Colonel Steve Warren said the delivery of arms in part means expediting orders that had already been made.

"It's a combination of pre-existing orders made by our partner nations and some new requirements as they expend munitions."

Saudi Arabia has been the top recipient of US weapons exports under president Barack Obama with $46 billion in new agreements. Of all US weapons sales under Obama, the majority — 60% — have gone to the Middle East and the Persian Gulf, according to a recent report by William Hartung, Director of the Arms and Security Project at the Center for International Policy.

"In addition, over $500 million in US weaponry destined for Yemeni security forces has gone missing, and may have found its way to Houthi forces or even to al-Qaeda in the Arabian Peninsula.," Hartung explains. "The faction of the Yemeni army that has joined hands with the Houthi rebellion has ample US-supplied armaments as well. It’s hard to imagine a clearer example of the negative consequences of aggressive arms dealing than the current situation in Yemen."

Fighting Has Been "Catastrophic" for Civilians

Saudi Arabia, at the head of a coalition of other Arab states, started conducting airstrikes in Yemen, on March 26. Some describe the conflict as a proxy war since the Houthis have some support from Iran — the regional and religious rival of Saudi Arabia — though the extent of Iran's military support to their fellow shiites in Yemen is unclear.

An estimated 100,000 people have been displaced since the airstrikes began, and the Red Cross on Tuesday called the situation in the Aden — where Houthis are battling Hadi loyalists for control of the port city —  "catastrophic."

"Most displacements have taken place from and within al-Dhale, Abyan, Amran, Saada, Hajja. The displaced persons are mostly being hosted with relatives," agency spokesman Rajat Madhok told Al Jazeera.

UNICEF has said the majority of the displaced are women and children, and in a statement Tuesday the agency reported the deaths of 74 children, with 44 more maimed since March 26.

"These are conservative figures and UNICEF believes that the total number of children killed is much higher," the statement read.

The aim of the attacks by the coalition of Sunni-ruled Gulf states is to force the Houthis — seen as terrorists by Saudi Arabia — back into a UN-backed process for political transition disrupted by their taking Sana’a in September and angering Saudi Arabia.

In 2012, President Saleh was replaced after a 2011 "Arab Spring" style uprising. The political settlement that followed saw Western-supported Hadi take his place. The Houthis, after taking Sanaa, at first left Hadi in power, though only nominally as they effectively controlled the city on the ground. The rebels are part of a Shia minority that represents only about a quarter of the country's population.

At the same time as the conflict rages between Houthis and Hadi loyalists, al-Qaeda has made worrying gains in impoverished areas of the South and East of the country.