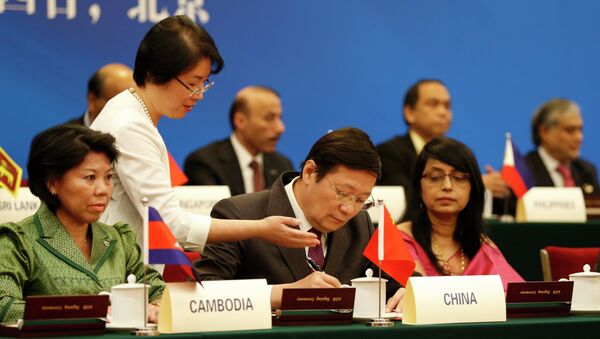 © AFP 2023 / Takaki Yajima /POOL
Subscribe
International
India
Africa
Washington should reconsider its idea of global supremacy and adopt a pragmatic stance, shifting from a dictating policy to a policy of building a consensus in a multipolar economic order, claims Rebecca Liao, a writer and China analyst.

France's Decision to Join China-Led AIIB Unaffected by US - Paris
Developing countries view the BRICS bank and the China-led Asian Infrastructure Investment Bank (AIIB) as a viable alternative to the World Bank and the International Monetary Fund (IMF), noted Rebecca Liao, a Silicon Valley-based writer and China analyst, qualifying Beijing's pledge not to interfere in the domestic affairs of other countries as a "direct rebuke" to Western foreign policies.

The United States "needs to realize that the countries of the emerging world order no longer believe development efforts must spread Western political and economic values," the writer underscored.

Asia
Et Tu, Brute? Israel Latest US Ally to Join Chinese AIIB
The development project’s conditions imposed by the World Bank and the IMF have historically included the implementation of Western-style government institutions. However, IMF "remedies" sometimes only deepened the economic woes of nations suffering from financial hardships, the analyst stressed referring to Asia's economic collapse of 1997, and similar situations in Latin America, Africa and Eastern Europe. The writer stressed that the lack of decision-making power in the IMF and World Bank also disappointed developing countries, prompting them to seek another source of aid.

So far, developing nations concerned with economic growth, rather than with adopting "neoliberal orthodoxy," consider the China-led initiatives – the New Silk Road project, the AIIB and the BRICS Bank – far more attractive than the IMF's and World Bank's programs.

The writer noted that the United States sees the AIIB as China's attempt to maintain greater control over Asia. However, many of Washington's longstanding allies have already announced their willingness to join the China-led initiative aimed at fulfilling Asia's $1 trillion infrastructure needs.

Russia to Become Founding State of China-Led Development Bank in Mid-April
"Thirty-five countries have signed up, not for short-term investment prospects but as a bet that a China-led bank may do better than its Washington-based counterparts for Asia," Rebecca Liao emphasized.

According to the writer the US should reconsider its global supremacy idea and adopt a pragmatic stance, using the IMF and World Bank purely as instruments for economic policy coordination, giving developing countries "a greater voice." On the other hand, any sort of "conditionality," especially of a political nature, is unproductive and unnecessary for global development and economic stability, the analyst insisted. Washington should get used to its new role as an "influential pragmatist" in a new multipolar economic order, Rebecca Liao concluded.