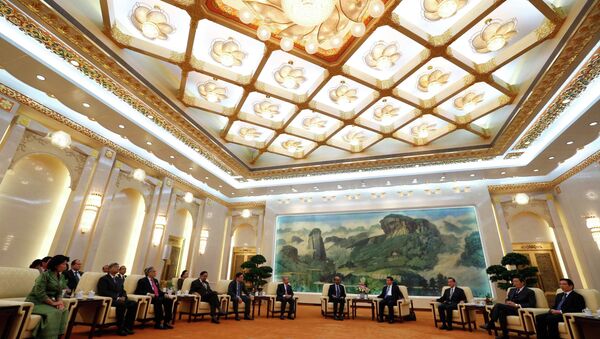 After pressuring Australia into passing up the opportunity last year, the White House expressed its disapproval of the UK's application to become a founding member of the Asian Infrastructure Investment Bank, a rival for Washington-based financial institutions.

BRICS Development Bank to Function by End of 2015 - Russian Official
The US government has expressed disapproval of the UK's decision to become a founding member of the Asian Infrastructure Investment Bank [AIIB]; it is the first member of the G7 to apply to join the organization, which will be formally established by the end of 2015 and have its headquarters in Beijing.

"As the first major Western country to apply to become a prospective member of the AIIB, the UK will join discussions later this month with other founding members to agree the Bank’s prospective Articles of Agreement, setting out the governance and accountability arrangements that underpin the AIIB’s operating practices," said the UK Treasury in a statement on Wednesday.

"Joining the AIIB at the founding stage will create an unrivaled opportunity for the UK and Asia to invest and grow together," said UK Chancellor of the Exchequer George Osborne, adding that his government "has actively promoted closer political and economic engagement with the Asia-Pacific region" as a key part of the country's long-term economic plan.

However, officials from the US signaled their unhappiness about the UK's decision to pursue greater economic engagement with China through the institution, and repeated criticism US State Department spokesperson Jen Psaki voiced last year that the project does not "meet international standards of governance and transparency."

"This is the UK’s sovereign decision," said the White House in a statement. "We hope and expect that the UK will use its voice to push for adoption of high standards."

A senior US official speaking to the Financial Times was forthright with their criticism: "We are wary about a trend toward constant accommodation of China, which is not the best way to engage a rising power," he said, complaining that the British government had taken the decision after "virtually no consultation" with the US.

World Bank Should Address its Own Violations in Ethiopia - HRW
In October last year, 21 Asian nations signed a Memorandum of Understanding [MoU] on the establishment of the new bank, which is intended to finance infrastructure projects and promote regional cooperation in the Asia-Pacific region. The bank represents an alternative source of funds from the Washington-based International Monetary Fund and World Bank, and the Asian Development Bank, which is based in Manila and whose largest shareholders are Japan and the US.

Several US regional allies, however, were absent from the signing ceremony, and the UK is not the first nation to receive objections from the US Department of State: the Australian Financial Review reported in October that US Secretary of State John Kerry had "personally asked Tony Abbott to keep Australia out of China’s new infrastructure development bank."

China is keen for Australia, Japan and South Korea  to join the project, with President Xi Jinping saying at the signing that the AIIB would "welcome all interested countries to actively participate and achieve win-win cooperation," according to a statement from the Chinese Ministry of Foreign Affairs.

According to the MoU, the authorized capital of the AIIB is $100 billion and the initial subscribed capital is expected to be around $50 billion. China has said it is willing to subscribe up to 50 percent of the capital for the bank, and it is expected that the Prospective Founding Members will complete the signing and ratification of the Articles of Agreement in 2015 before the AIIB is formally established by the end of the year.