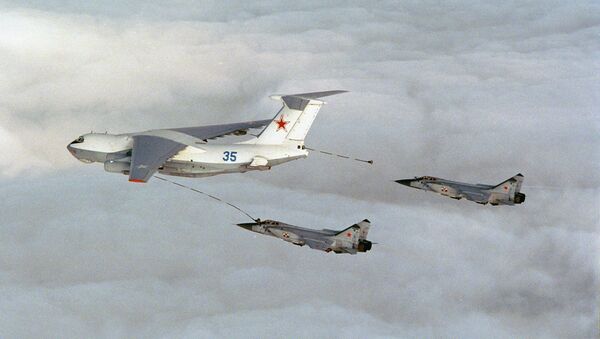 © AP Photo / 331/332-Squadron of the Norwegian Air Force
Subscribe
While expanding NATO bases closer to Russian borders, the US government is trying to bully Vietnam into stopping its military cooperation with Russia in the Pacific.

Sputnik's sources in the US Department of State confirm that America is pushing Vietnam to stop letting Russia use Cam Ranh Bay military base. Russian air force recently used the facility to refuel nuclear-capable bombers. US officials say Russian bomber planes have increased the number of flights in the region and even conducted what the Pentagon calls “provocative flights” around Guam, a US territory in the Pacific that is home to a large military base.

US Army General Vincent Brooks told Reuters that the Russian planes circling Guam are refueled by Russian tankers flying from Cam Ranh Bay, a deep-water harbor that was a US air and naval base during the Vietnam War. The flights, Brooks alleges, show that Russia was “acting as a spoiler to our interests and the interests of others.” Brooks contends that the flights have increased since Russia’s conflict with Ukraine began, he says as a show of Russian strength and to gather intelligence.

The US considers Cam Ranh Bay an important part of a Washington strategy to focus more on the Asia as a way to neutralize China’s growing influence in the region.

Vietnam is playing both sides of the fence, seeking closer ties with the US but also remaining close to Russia in a number of areas, including defense.

The State Department says it respects Vietnam’s right to enter into agreements with other countries, but “we have urged Vietnamese officials to ensure that Russia is not able to use its access to Cam Ranh Bay to conduct activities that could raise tensions in the region.”

Russia had said in November that it planned to send bombers on patrols over North American waters, and at the time the Pentagon called it routine training in international airspace.

The Vietnamese government has not commented on the US request.