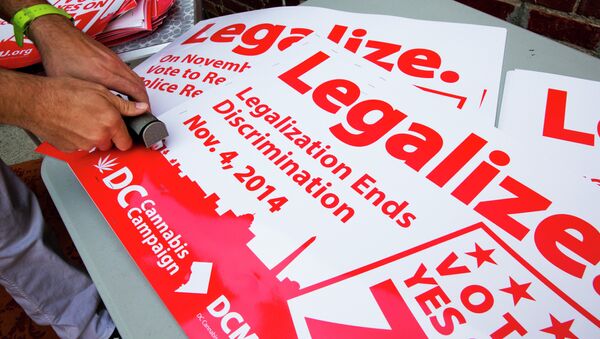 © AP Photo / Jacquelyn Martin
Subscribe
At the stroke of Midnight on Thursday, people in Washington D.C. will be able to legally smoke marijuana, unless congress acts to stop them.

Police officers will begin to carry business card-sized summaries that show what is legal and what is not, as part of a public education campaign, despite Congress passing a bill in December, to ban funding the local law.

Approved by 65% of voters last fall, the new law to legalize marijuana in D.C. permits possession of small amounts of marijuana by those ages 21 or older, but not in public.

According to the rules:

Those ages 21 or older can possess up to two ounces of marijuana, grow up to six cannabis plants at home (with no more than three mature), or give away up to one ounce of marijuana to someone else (who also must be at least 21 years old).

Those younger than 21 cannot possess any amount of marijuana. Any such marijuana can be seized by an officer.

You can be arrested if you smoke or consume marijuana in public, have more than 2 ounces, or sell any amount of marijuana.

Those who drive while impaired or under the influence of marijuana will be prosecuted.

However, under federal law, federal police officers may arrest anyone in the District for possession of any amount of marijuana, specifically on any federal property.

This new law is only local, considering the District includes both D.C. land and federal land, which makes the possession of pot on federal parkland like the National Mall, Rock Creek Park illegal under federal laws.

On D.C. land, smoking or consuming pot in public would also be illegal.

In addition to the rules of the new law, the cards to be distributed by police will warn of health risks associated with the use of marijuana and other regulations.

"You shouldn't use marijuana just because local laws have changed," one statement reads.

The card also states “If marijuana is seized because a person doesn't provide proof of age, that person can pick up his or her pot from the police station within three weeks if they provide ID.”

According to an information sheet distributed by D.C. Mayor Muriel Browser’s office on Tuesday, the new law allows for the possession and consumption of marijuana in a user’s home, but it does not legalize its sale. 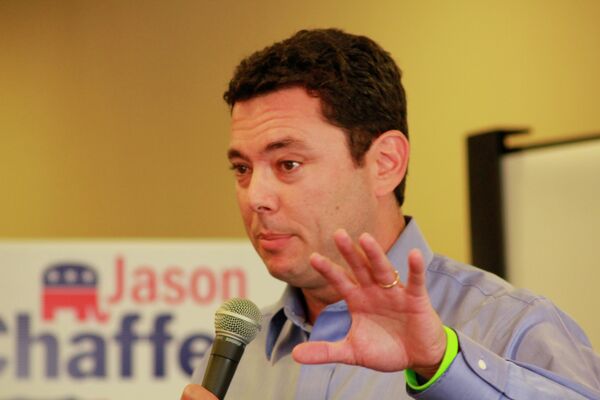 When Congressional Republicans blocked Washington D.C.’s ballot measure, they were not cutting against states’ rights and smaller government, but fulfilling their role in the federal government.
© Flickr / Michael Jolley

The District passed the law after its voters approved an initiative to legalize the possession of pot for recreational use on Nov. 4. A month later, congress attempted to halt this law by passing a federal bill that forbids the city from spending federal or local funds to “enact” the law.

Republican House Oversight Committee Chairman Jason Chaffetz told CNN earlier this month that when Congressional Republicans blocked Washington D.C.’s ballot measure, they were not cutting against states’ rights and smaller government, but fulfilling their role in the federal government.

“Looking at the Constitution, Washington, D.C. is different. They are not a state and we have a role to play and the Congress passed this,” said Chaffetz, whose committee oversees the District of Columbia. “I respect the people who live here and most everything passes through without a problem. But the idea that this is going to be a haven for pot smoking, I can’t support that.”

But D.C. Council says Congress acted too late to stop the legalization bill. So for now, residents in the District are moving closer to legalized marijuana, despite opposition from some in Congress.