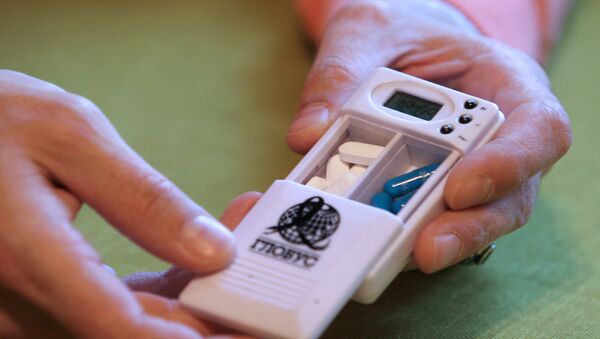 © Sputnik / Maxim Bogodvid
/
Go to the photo bank
Subscribe
The results of a study presented at an annual conference on retroviruses show that while financial incentives do not encourage those at risk to come forward for HIV testing, a small proportion respond to being paid to take their medication.
According to the results of a study presented on Tuesday at the annual Conference on Retroviruses and Opportunistic Infections currently being held in Seattle, issuing coupons worth up to $125 at HIV testing sites did not encourage more people to come in for tests, but patients at some clinics were more likely to keep up with their viral suppression treatments if they were offered gift cards worth $70.

"Financial incentives may not work for everyone or for all HIV testing and care sites, but our results show promise for using such incentives in a targeted manner, for example in those sites where fewer people have their HIV under control," said lead investigator Dr. Wafaa El-Sadr in a press release, adding that "garnering the benefits of HIV treatment for the individual and the community are important priorities and both require achieving high levels of control of HIV."

New Strain of HIV Causes AIDS Before Victims Realize They Are Infected
The study, which cost $2.8 million over three years, was carried out in clinics in the Bronx, New York, and Washington DC, areas with some of the highest HIV infection rates in the country, as part of efforts to prevent the spread of the disease by increasing testing and treatment. According to officials from the District of Columbia's Health Department, the prevalence of infection in Washington DC is at least three percent among people over 12 years of age, a rate "higher than West Africa."

A rate of one percent or more is classified as an epidemic by the World Health Organization and the US Centers for Disease Control and Prevention (CDC). The CDC also estimates that more than 1.2 million Americans are living with the disease, one in seven of whom are unaware of their infection, and only a quarter of  whom are virally suppressed.