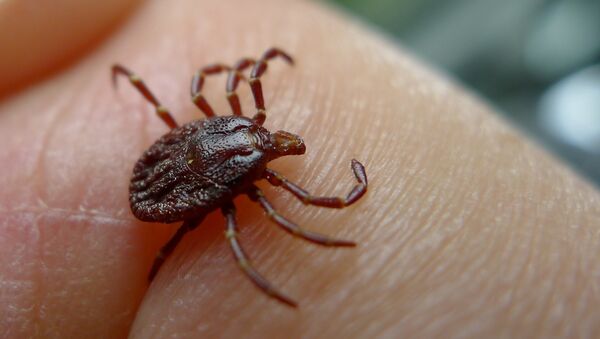 CC BY 2.0 / John Tann /
Subscribe
International
India
Africa
US health officials are investigating a new strain of virus linked to the death of a Kansas man, who become sick after being bitten by a tick, then went into organ failure and died about two weeks later.

The Centers for Disease Control and Prevention is working with Kansas officials to find any other cases of the virus, which the CDC named “Bourbon” after the county where the man lived, Bloomberg reported.

The pathogen belongs to a group known as thogotoviruses.

The man fell ill a few days after finding an engorged tick on his shoulder while working outside in Bourbon County last year. He suffered from fever and headache, and a doctor prescribed an antibiotic commonly used against tick-borne diseases.

The man’s condition continued to worsen, however. His kidney function deteriorated and he was unable breathe on his own. He died on the eleventh day of his illness.

Kansas officials in December said that they were investigating the virus with the CDC, and that it resembled other tick-borne illnesses.

Before he became sick, the man, who was more than 50 years old, was considered healthy, the CDC said. The center’s researchers identified the virus by looking for genetic traces in the man’s blood, Bloomberg reported.

The recent discovery of Heartland virus in Missouri, also possibly linked to ticks, led the CDC to say “that the public health burden of these pathogens has been underestimated.”

The CDC said next-generation sequencing, a fairly new technology that can scan blood samples for many viruses or bacteria at once, will help health researchers make similar discoveries in the future, Bloomberg reported.