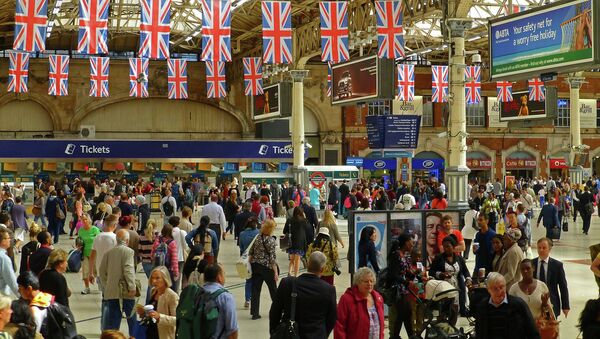 Recent research by the European Commission revealed that rail passengers in Britain are among the most satisfied in the whole of Europe. The Eurobarometer survey questioned 26,000 passengers in 26 of the 28 member states, omitting Cyprus and Malta because they have no rail network.

And three-quarters of the commuters in the UK gave either a ‘high’ or ‘good’ rating for the overall level of service. But Britain’s overall satisfaction (78 per cent) was just behind Finland (80 per cent).

However, the Rail Delivery Group pointed out that Britain’s railway network is bigger and more complex with ‘more people using London Victoria station each year, than the total number of passengers journeys in Finland’.

Who said there's no room on the train on a Monday morning #squeezedin #sardine pic.twitter.com/KPRBDp3d

But contrary to research carried out by the European Commission, new data complied in London reveals that Twitter has become the new media platform for train delays. Rail passengers in London sent a total of 1,778,090 tweets directed at the 14 rail providers last year.

Standing in front of the departures board with a smart phone in hand, commuters are turning to the social media platform while they wait for their train's progress to be announced.

@EMTrains if you allow double the number if people on the train… Why don't the tickets cost half the price? #overcrowded #noseat #ripoff ����

The various tweets by disgruntled passengers and commuters have been analysed by a team of data scientists. Commute London data reveals that there were 70,969 tweets to railway companies about train cancellations in 2014.

The highest numbers of tweets were directed at Southern Rail @southernrailuk with 12,481, followed by First Great Western @fgw at 9,573 and Greater Anglia @greateranglia on 9,314.

The new data study reveals that First Great Western received the most complaints on social media for train carriages being overcrowded with 11,227 tweets.

@greateranglia This is what you get for a 5k ticket a gap on the floor between these two! #train #noseat #goldcard pic.twitter.com/9o34owtPi0

"It’s ‘quickly becoming the preferred platform for the airing of customer complaints. The problem is inflamed by an increasingly sophisticated mobile phone market where high quality phone cameras can quickly capture, record and share railway delays and incidents online — at the touch of a button."

“Our analysis of 2014 Twitter data showed that there were a total of 1,778,090 tweets directed at the 14 rail providers examined in this report over the last year,” said Wood.

This overground train is so packed, I may leave pregnant #sardine #TfLstrike pic.twitter.com/2Ysp7DtlWC

A source in the transport industry who wanted to remain anonymous told Sputnik that “the rail companies have been slow to embrace social media and that commuters have taken the high ground and used it as a battering ram”.

Delays infuriate commuters and can cause overcrowding on the concourse. Recent social media analysis reveals that there were 280,960 tweets at the rail providers that included the words, ‘stuck’, ‘late’ or ‘delay’ last year.

Commute London is calling for the rail providers to take the tweets seriously.

“This research paper highlights the use of social media by commuters to alert rail providers to the challenges and problems experienced on current services in 2014.

“The industry still has a long way to go before it can achieve the levels of satisfaction it would like to achieve. Social media sites like Twitter provide an instant, real-time channel to assist in this process winning over customers through open and honest communications.”

However according to the Eurobarometer survey, satisfaction with punctuality and reliability is the highest in the UK with 73 percent; ahead of France with 57 percent, Germany with 48 percent and Poland with 36 percent.

Meanwhile in London, tweets are telling a different tale.