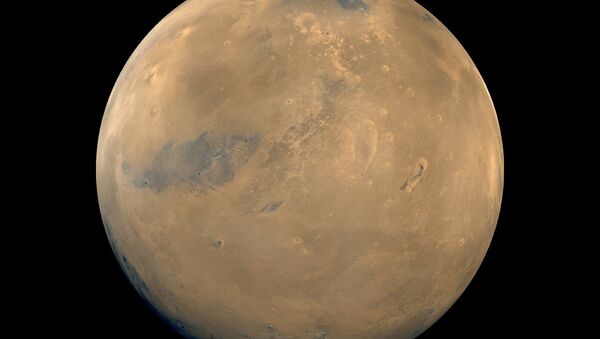 Plumes of smoke seen around the edge of Mars have left astronomers scratching their heads.

Up, Up and Away! First Humans Chosen for Mission to Mars
Cloud plumes observed extending 250 kilometers from the surface of Mars for ten days at a time in 2012 are the subject of an article published in this month's edition of the journal Nature, with astronomers at a loss as to provide an explanation for the phenomenon.

"At about 250 kilometers, the division between the atmosphere and outer space is very thin, so the reported plumes are extremely unexpected,"  lead author of the paper Agustin Sanchez-Lavega, of the Universidad del País Vasco in Spain, said in the press release published by the European Space Agency [ESA].

The 250 kilometers of cloud rising from Mars' surface were spotted by amateur astronomers in March and April 2012, who passed on their findings to the experts. A search of archived images of the moon taken with the Hubble Space Telescope between 1995 and 1999 revealed occasional clouds of up 100 km in altitude, but on only one occasion, 17 May 1997, were such large plumes discovered. Further checks of amateur images taken between 2001 to 2014 likewise failed to yield anything more than 100 km from the planet's surface.

Russian Space Agency’s Computers Are Hacker-Proof – Source
The scientists explain that they explored two possible explanations for the phenomenon, using photometric measurements. The first, "a reflective cloud of water-ice, carbon dioxide-ice or dust particles," and the second, an "auroral emission, of a brightness more than 1,000 times that of the Earth’s aurora, over a region with a strong magnetic anomaly where aurorae have previously been detected."

However, the team point out, clouds of water or carbon dioxide ice crystals have always been confined to less than 100 kilometers from the planet's surface, while suspended dust has been detected at altitudes of up to 60 kilometers during dust storms, far less than the 250 km seen in 2012.

Highly concentrated and localized patches of auroral emissions have been observed at 130 kilometers altitude, but not higher, explain the team in their paper, published on Monday, adding that "both explanations defy our current understanding of Mars’ upper atmosphere."

The scientists hope that next year's planned launch of the ExoMars Trace Gas Orbiter mission to Mars, undertaken jointly by the ESA and Roscosmos, will be able to shed more light on the mystery