Up, Up and Away! First Humans Chosen for Mission to Mars 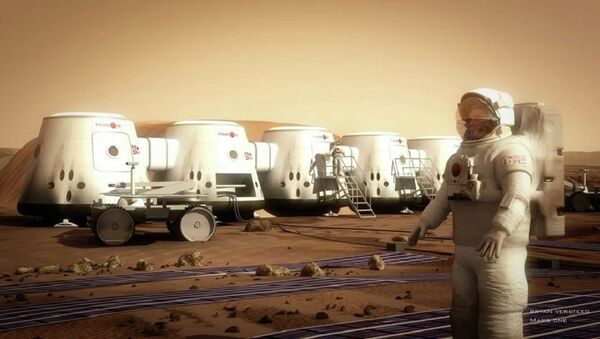 © Photo : Mars One - Human Settlement of Mars
Subscribe
One hundred people from around the world have been shortlisted for a mission to Mars.

Fifty men and fifty women are all hoping to become the first human beings to walk on the red planet.

They now face a series of tests to see how well they work under pressure, with part of the training to take place within a simulated Martian environment.

The Mars One Project plans to set up a permanent human settlement on the planet by 2024.

Dutch entrepreneur Bas Lansdorp, co-founder of Mars One said: “These aspiring Martians will provide the world with a glimpse into who the modern day explorers will be”.

Despite the risks which include suffocation, starvation and dehydration, more than 200,000 people on planet Earth applied to become volunteers for the colonisation project.

The greatest risk, according to Igore Mitrofanov from the Space Research Institute at the Russian Academy of Sciences, is the huge amounts of radiation that the volunteers be exposed to.

Five Russians and five Britons have made it to the short list, including Hannah Earnshaw, a 23-year-old PhD student in astronomy at Durham University.

The other hopefuls from the UK are Dr Maggie Lieu, 24, a PhD in Astrophysics at the University of Birmingham, 21-year-old Oxford University student Ryan Macdonald, Alison Rigby, 35, a science laboratory technician from Kent, and Clare Weedon, 27, from Surrey, who works for Virgin Media.

They were selected from a pool of 660 candidates following online interviews with the mission’s chief medical officer. They were tested on their understanding of the risks involved, team spirit and motivation to be part of the expedition.

The second round of candidates will be filmed for a TV documentary. Those who don’t make the cut can reapply in a new application round later this year.

If the first mission to Mars is a success, more people will be sent to join the settlement every two years. It’s hoped they will form the first human colony on the red planet.