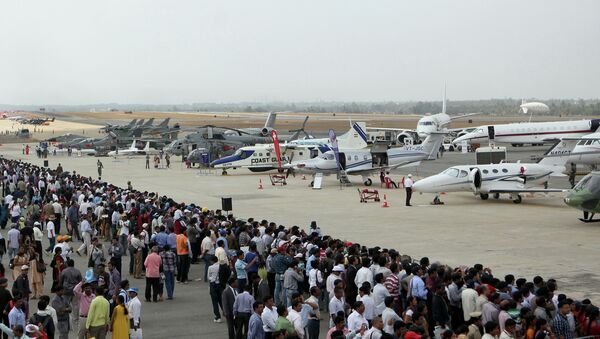 © AFP 2021 / Manjunath KIRAN
Subscribe
Aero India, an international aerospace exhibition, is kicking off on Wednesday at Air Force Base Yelahanka in the Indian city of Bengaluru.

Russia's 2014 Arms, Military Equipment Supplies to India Amount to $4.7 Bn
MOSCOW (Sputnik) – Aero India, organized by India's Defense Ministry with the support of the Indian government, focuses on military aviation equipment and weapons, as well as aircraft-building and avionics for civil aviation.

The idea of creating a commercial military aviation exhibition in India dates back to the early 1990s, when private businesses were admitted into this industry. Many private companies were willing and able to engage in military research and production. In 1992, a decision was made to hold an exhibition at the Yelahanka airbase outside Bengaluru, which is India's high-tech capital, similar to Silicon Valley in the United States.

The first exhibition, originally called Avia IndiA, took place at Yelahanka in 1993 with the support of the Indian Air Force. It was a significant event for India's aviation industry, and it was decided to hold this exhibition at Yelahanka once every two years. The next exhibition was scheduled for 1995, but was later canceled for security reasons and due to a lack of proper training.

In 1996, Yelahanka hosted the first exhibition officially named Aero India, which set the stage for all subsequent exhibitions in Bengaluru. The first foreign participants came to the exhibition in 1996, with Russia and the United States presenting static and flying exhibits.

Since then, the air show has gained popularity not only in India, but all over the world. Thousands of tourists witnessed the air show in Bengaluru, which made it popular among non-specialists as well.

The exhibition held in 1998 already had all the trappings and features of a major international air show. It was attended by over 170 companies from 17 countries, including Boeing, Allied Signal, Bell Textron, Airbus Industries, Aerospatiale, Dassault and British Aerospace. Russia and France had the largest foreign presence.

The next exhibition, which was not held until 2001, was attended by 150 companies from 18 countries. Another 37 countries sent representative delegations. The air show was attended by 49 Russian companies. The Russian Su-30MKI multipurpose fighter was the key attraction of the show. The Russian MiG Corporation for the first time presented the carrier-based fighter MiG-29K, which participated in demonstration flights. Rosoboronexport signed a contract with India's Defense Ministry to supply the Indian Navy with five Ka-31 helicopters.

Since then, the international aerospace exhibition Aero India has been held regularly every two years, in odd-number years. It usually takes place in mid-February when the weather is fair in southern India.

The Aero India air show is constantly expanding to include more participants and visitors every year. In 2003, foreign participants had 174 stands, while in 2005, they had 236. The number of participating Indian companies also grew from 74 in 2003 to 136 in 2005.

In 2007, Aero India was attended by over 400 companies, including major manufacturers and suppliers of military and civilian aircraft and aerospace equipment from 15 countries. The Russian delegation included about 40 companies. The exhibition featured about 100 aircraft models, including the Russian MiG-35 and MiG-29 OVT, the Be-200 amphibious aircraft, the Mi-17 helicopter and the Sukhoi Superjet 100 planes.

The air show that year was marred by one of the Sarang aerobatic team helicopters of the Indian Air Force crashing just before the opening of the exhibition. Its crew was practicing a maneuver called The Scissors, but miscalculated the altitude and hit the ground. The test pilot died and the wing commander was badly wounded.

About 100 civilian and military aircraft and around 600 companies participated in Aero India 2009. The highlight of the Russian presentations was the MiG-35, which demonstrated miracles of aerobatics in the air. In addition, Indian citizens were offered the opportunity to take a flight in the Russian fighter. Rosoboronexport also presented the capabilities of the Be-200 aircraft to the Indian military.

In 2011, 675 companies from 29 countries brought their latest aerospace designs to the show. The area of the show has grown by 70 percent to a total of 75,000 square meters, up from 44,000 square meters in 2009. The number of exhibitors has also increased by 16 percent. The exhibition was attended by more than 250,000 visitors. At Aero India 2011, Russia presented over 80 military products, including airplanes, helicopters, air defense systems, aircraft engines and radars. 35 Russian companies took part in the exhibition, including Rosoboronexport, Sukhoi R&D Bureau, MiG, Ilyushin Aviation Complex, Almaz-Antey, Irkut Corporation, Russian Helicopters and Kamov. The Superjet 100 passenger airliner did a demo flight in Bengaluru.

Aero India 2013 was attended by 570 companies (274 foreign and 296 Indian) from 29 countries. The grounds expanded to over 108,000 square meters. The most striking moment at Aero India 2013 was the return of civil aviation to the show. This time, almost 55 percent of the aircraft presented at the show were civil airliners.

The Russian exposition covered an area of 857 square meters with 37 show participants, 18 of which represented military equipment.

This was the Russian Knights aerobatic team's debut at the Aero India air show.

An international workshop, one of the leading workshops in the aerospace industry, always takes place before the air show in Bengaluru. It is conducted by the Defense Research and Development Organization (DRDO) of India's Ministry of Defense in conjunction with the Aeronautical Society of India.

The 10th International Aerospace Exhibition Aero India 2015 will take place at the Indian Air Force base in Bengaluru from February 18 to 22, 2015. It is expected to be attended by 750 companies from around the world, over 150,000 business representatives and 300,000 visitors.

Russia has traditionally been a major participant in this show. Its exposition includes the most advanced equipment for furthering military and technology cooperation with India.

The Kupol Electromechanical Plant in Izhevsk will bring its new products to the exhibition: two models of the Thor anti-aircraft missile system: the track-based Thor-M2E and the modular Thor M2KM (prototype models). The company will also present an overhauled Osa anti-aircraft missile system. The exhibits also include modern Russian-made commercial and military helicopters, including the Mi-8/17 new military transport helicopters series, the Ka-226T light multipurpose series, the Mi-8/17 civil multipurpose helicopters and a multi-purpose light helicopter Ansat. Promising models to be presented by Russian Helicopters at Aero India 2015 include the Mi-171A2, a helicopter based on the Mi-8/17.