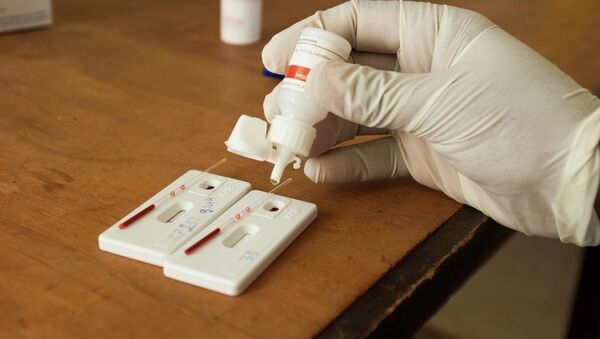 © Flickr / UNICEF Ethiopia
Subscribe
The new strain of the virus has been named CRF19. It is a combination of subtypes A, D and G.

Russian HIV Vaccine Passes 2nd Clinical Trial Phase, Health Ministry Says
Researchers studying patients in Cuba discovered an aggressive form of the HIV which can progress to AIDS in just three years. The observation was made by an international team at the University of Leuven, Belgium.

On average, without treatment HIV infection takes 5 to 10 years to progress to AIDS.

A fast progression of HIV to AIDS usually is more a result of the patient’s weak immune system rather than the particular subtype of HIV involved, according to Professor Anne-Mieke Vandamme.

The new strain has been named CRF19. It is a combination of subtypes A, D and G.

Beating AIDS Needs Shift to Children, Youngsters, Pregnant Women: Experts
When a person contracts HIV, the virus anchors to human cells with the help of co-receptor protein called CCR5. It will have further to switch to another anchor point called CXCR4 before it progresses to AIDS. The process of switching is difficult and lengthy.

People with the new strain of HIV have a higher concentration of the virus and the molecule RANTES, which is a defensive molecule and is released when a person is infected. This molecule normally binds with CCR5. So the more RANTES molecules are released, the more CCR5 are taken. As a result, the HIV is forced to bind with CXCR4, causing progressing to AIDS much earlier.

Despite the recombinant HIV responds to most antiretroviral drugs, people may not realize they have AIDS until it is too late for any therapy.

According to the scientists, earlier this form of HIV has been seen in Africa, but there were not enough patients for a full-scale research. In Cuba, the virus is wide spread, so it can be thoroughly studied.