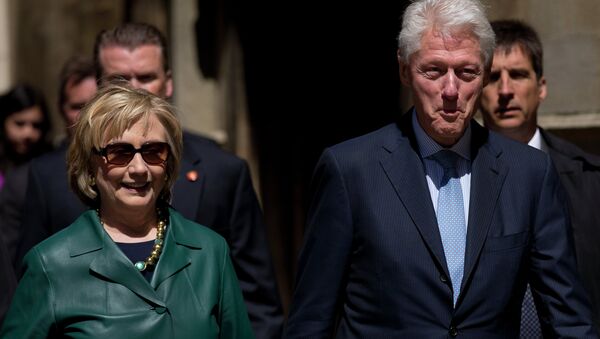 As US prosecutors consider filing criminal charges against UK-based HSBC for aiding tax evaders, several major donors to a Clinton-family foundation are revealed to have ties to the bank’s controversial Swiss division.

The Bill, Hillary & Chelsea Clinton Foundation received $81 million from from various international donors who were clients of  HSBC’s Swiss division in Geneva, the Guardian reports.

Caring came under scrutiny after it came to light that he had made a $3.4 million cash withdrawal from HSBC at one point. “I appreciate it was a large amount of money but I was put in that position at the time because the people I was dealing with did not want to use HSBC in a particular transaction,” he later told the Daily Mail.

Seven of the HSBC accounts whose details were recently leaked to journalists matched records in a database released in 2008 by the Clintons’ foundation in response to conflict-of-interest concerns raised during Hillary’s presidential campaign. Under US law, foundations don't normally have to disclose the names of donors.

Representatives of both Giustra and Caring said their Swiss HSBC accounts complied with all applicable law, and neither has been accused of being part of the tax evasion scandal currently plaguing the world’s second largest bank.

As Hillary Clinton is widely expected to enter the 2016 presidential race, her and her family’s connections to such wealthy international mega-donors may not play well in a campaign likely to run up against debates about income inequality.

The accusations swirling around HSBC only intensified over the weekend with the leaking of a massive trove of secret documents detailing more than 30,000 accounts that contained more than $120 billion over the years 2005-2007.

The documents show that HSBC’s Swiss division had apparently helped its clients cheat their country’s tax systems, handled huge sums of cash with minimal questions asked, colluded with some clients to conceal their undeclared "black" accounts, and provided accounts to international criminals, corrupt businessmen and other high-risk individuals. EMBED

The documents were leaked by bank employee Herve Falciani who downloaded them illegally before fleeing to France.

"Friends — let's say partners — gave me these data," Falciani told CBS’ 60 minutes. "I'm not the only person in banking system that wants to raise alarm."

After the documents were released, HSBC admitted wrongdoing but said that it had reformed its practices and no longer violated banking regulations.

“Major regulatory reform is under way in numerous jurisdictions to ensure … that in the near future, an individual wishing to 'hide' assets from tax authorities will be unable to do so. HSBC fully welcomes and supports these reforms,” HSBC said in a statement.

HSBC has been under investigation by the US government for years, and in 2012 was fined $1.9 billion when it was found to have laundered money for Mexican drug cartels and violated US sanctions.

Though the secret documents are only just being published, the US Department of Justice received them in 2010 and has had an on-going investigation into the bank.

“The government comes down hard on individuals who break the law time after time, and it should do the same for large financial institutions, “ said Democratic senator Elizabeth Warren of Massachusetts on Tuesday.

DoJ officials told the Guardian that the investigation has been “very active” but had no timeline as to when charges might be brought. They left the door open to pursuing charges not just against tax-evading clients, but bank executives as well. “It is certainly something that is under consideration.”

HSCB is headquartered in London and has an international network of 6,200 offices in 74 countries, serving around 52 million customers.