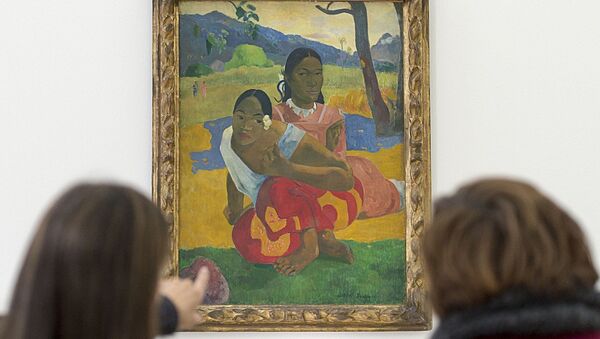 Russia's Mariinsky Ballet to Discuss 2016 Visit to Washington This Week
A painting by Paul Gauguin called Nafea Faa Ipoipo?, or When Will You Marry? depicting two Tahitian women has been sold privately for $300 million, its Swiss seller confirmed to the New York Times on Thursday.

"We got a good offer. The market is very high and who knows what it will be in 10 years. I always tried to keep as much [of my family's collection] together as I could," Rudolf Staechelin, 62, a retired Sotheby’s executive, told the paper, adding that to sell was sad, but "a fact of life."

The Swiss added that he had decided on the sale in order to diversify his family's assets, of which he said over 90 percent are paintings hanging in museums free of charge. His grandfather Rudolf Staechelin, a businessman from Basel, amassed the bulk of the collection in the period during the First World War and the early post-war years.

London Critics Name Russian Leviathan Best Foreign Film
In the late 1940s and early 1950's the merchant's son Peter Staechelin placed the core of the family collection of more than 20 Impressionist and Post-Impressionist works, which include paintings by Van Gogh, Cezanne and Matisse as well as the $300 million Gauguin, on long-term loan with the Kunstmuseum in Basel.

"We are painfully reminded that permanent loans are still loans. The people of Basel do not own these, and they can be taken away at any moment," said the Kunstmuseum in a statement on the ending of the arrangement, according to Artnet.com. The report adds that the sale also comes after a dispute between Staechelin and the local government over loan stipulations regarding the painting's display for the period when the museum is closed for renovation.

Picasso’s Granddaughter Sells $290 Mln of his 'Given Without Love' Artworks
"I don't deny it and I don’t confirm it," Staechelin replied to the NYT, when asked if the buyer of the painting was the state-run Qatar Museums, which also broke the previous record when buying the work by Cezanne for $259m. Sources in the art world told the paper that the canvas had been bought by a Qatari buyer, a claim also unconfirmed by the Museums in Doha, Qatar.

The painting is currently still on display in Basel, before going on a tour of different exhibitions planned for the year-long renovation period of the  Kunstmuseum Basel, Artnet reports. The canvas can be seen in Madrid's Reina Sofía museum and the Phillips Collection in Washington, D.C. before making the journey to new owners next January.