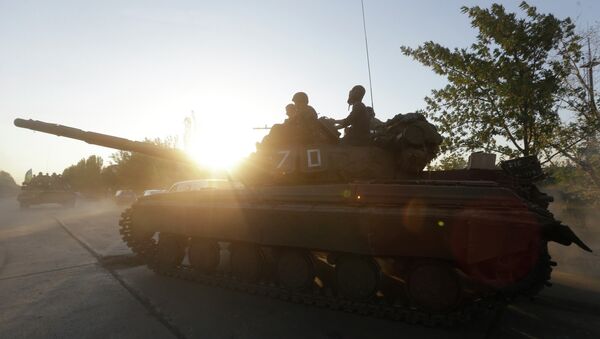 “Deliveries are already underway, unfortunately. Shells with NATO markings have been used in Horlivka,” Denis Pushilin, who is also the deputy speaker of the DPR’s parliament, said.

“These deliveries will lead to an escalation in the conflict. An enormous number of civilians are being killed indiscriminately,” Pushilin said.

Donetsk Military Claims Downed Ukrainian Plane, Helicopter
He also added that US tactics in war were also being used by Ukrainian armed forces.

“Criminal American methods of war are being used by employing heavy artillery from a distance that leads to a huge number of victims among civilians,” Pushilin said.

Media reports suggested earlier that US authorities were considering supplying equipment and arms, including Javelin anti-tank missile systems, to Kiev forces in light of an intensifying conflict in Ukraine's southeast.

The future of Ukraine reconciliation talks is not clear yet, the envoy of the self-proclaimed Donetsk People’s Republic to the talks said Tuesday.

Donetsk Insists Kiev Envoy to Contact Group Must Have Official Mandate
“There has been no news, there has been no answer. The incumbent government in Kiev is under strong influence of the United States, which wants the war to continue. So, as far as the resumption of talks in concerned, the forecast is unfavorable,” Denis Pushilin said.

Earlier on Tuesday, shelling by Ukrainian forces was reported in the Makiivka village east of Donetsk city and the Vuhlehirsk village bordering the Luhansk region. More than 1,000 people were reportedly evacuated from both settlements.

The surge of violence in eastern Ukraine has driven up the civilian death toll since the start of 2015, despite a ceasefire agreement between the warring sides reached in September 2014.

The latest Contact Group meeting on settling the Ukrainian crisis over the weekend failed to bring about results or an agreement.