Kurdish Troops to Fight IS in Mosul Alongside Iraqi Forces, Not Alone 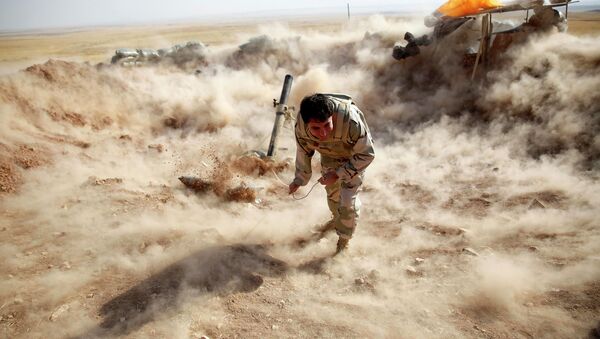 © REUTERS / Ahmed Jadallah
Subscribe
Kurdish Peshmerga forces will not be alone in their fight against the Islamic State, Iraqi Kurdistan President Masoud Barzani said in an interview to Al Arabiya Tuesday.

IS Militants Shoot Down Iraqi Helicopter, Both Pilots Killed
MOSCOW, December 16 (Sputnik) — Kurdish Peshmerga forces will not fight alone against the Islamic State (IS), but are ready to help the federal government liberate Iraq's second-largest city, Iraqi Kurdistan President Masoud Barzani said in an interview to Al Arabiya Tuesday.

"Liberation of Mosul is the duty of the federal government and the duty of the people of Mosul and of the surrounding tribes and the Sunnis in general. The Peshmerga will stand by their side and will help them strongly, but the Peshmerga alone cannot… enter in a battle to liberate Mosul because then the situation will turn into a Kurdish-Arab war, and this is something unacceptable for us," Barzani told Al Arabiya.

US to Consider Providing Weapons to Iraqi Kurds: Congressman
The president of Kurdistan also said that the successes in fight against the IS were largely due to the Peshmerga forces.

"I can say that 90 percent of the areas of the [Kurdish] region are safe now… I can say that the Peshmerga forces are the only ones who curbed ISIS [IS] progress," Barzani claimed, adding that if not for them, the oil-rich city Kirkuk would have fallen to extremists.

Moreover, the president blamed the former Iraqi government for failing to provide the Peshmerga forces, who lack weapons and ammunition to effectively fight the IS, with their share of military equipment allocated to the Iraqi Army by the United States after the liberation of Iraq in 2003.

The Islamic State is a Sunni jihadi group that launched an offensive in northern and western Iraq in June and announced the establishment of an Islamic caliphate on the territories under its control. Mosul was also occupied by the group in June.

While Iraqi and Kurdish troops are preparing to recapture the city, the IS has begun building up its positions around Mosul, senior Kurdistan Democratic Party official Saeed Mamozeini said, Arabic daily Asharq Al-Awsat reported Tuesday.