IS Militants Shoot Down Iraqi Helicopter, Both Pilots Killed 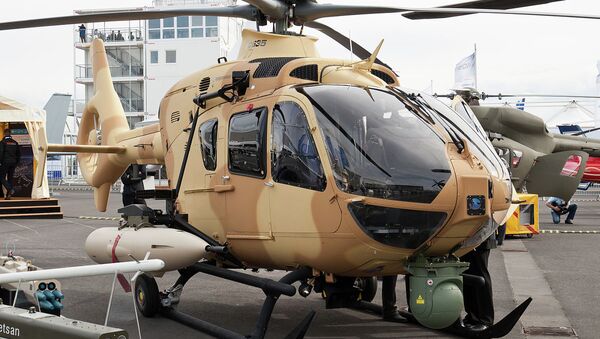 Islamic State militants have shot down an Iraqi helicopter near the city of Samarra, killing both pilots, about 95 kilometers north of Baghdad.

IS Militants Besiege 450 Tribal Fighters in Iraq's Anbar Province: Reports
MOSCOW, December 13 (Sputnik) – Islamic State (IS) militants have shot down an Iraqi helicopter, killing both pilots on board, Associated Press reported on Saturday, quoting an Iraqi senior Defense Ministry official, who spoke on condition of anonymity.

The EC635 helicopter was shot down on the outskirts of the city of Samarra, about 95 kilometers north of Baghdad.

The militants supposedly used a shoulder-fired rocket launcher. The agency says an Iraqi army official has confirmed the information.

The EC635 helicopter, also referred to as a Eurocopter, is a 3-ton multipurpose helicopter built by Airbus Helicopters as a military version of the Eurocopter EC 135. It is a twin-engine aircraft and can carry up to 8 people, including the pilot and a range of military equipment or armaments.