US to Consider Providing Weapons to Iraqi Kurds: Congressman 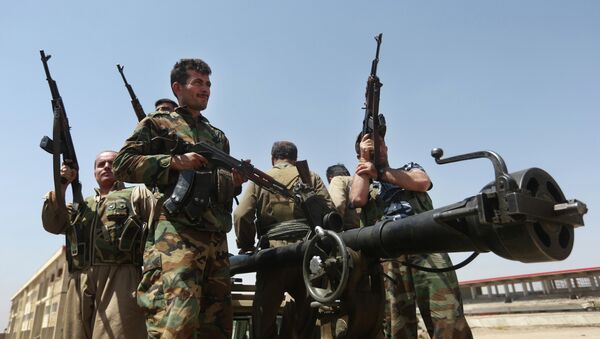 US House Foreign Affairs Committee Chairman Ed Royce has announced that the US House of Representatives has introduced a legislative proposal to provide lethal weapons to Iraqi Kurds.

WASHINGTON, November 21 (Sputnik) – The US House of Representatives has introduced a legislative proposal to provide lethal weapons to Iraqi Kurds fighting the Islamic State (IS) extremist group, US House Foreign Affairs Committee Chairman Ed Royce has announced in a statement.

"This important legislation will finally allow the 190,000 strong force [of Iraqi Kurds] to get the firepower it needs to effectively fight this brutal terrorist organization [IS]," Royce said in the statement, released Thursday.

The legislation would temporary authorize US President Barack Obama to provide arms directly to Kurdish forces fighting IS on the ground.

"Our critical partner in the fight against ISIL is badly outgunned," Royce stressed.

IS, also known as the Islamic State of Iraq and Greater Syria (ISIS) or the Islamic State of Iraq and the Levant (ISIL), is a Sunni jihadi group that has been fighting the Syrian government since 2012. In June 2014, it launched an offensive in Iraq, seizing vast areas in both countries and announcing the establishment of an Islamic caliphate on the territories under its control.

Kurds are one of the ethnic groups in Iraq and Syria that have suffered greatly from IS violence.

The United States started launching airstrikes against IS positions in Iraq in August.

In September, US President Barack Obama announced his decision to form an international anti-IS coalition. Washington extended its airstrikes against the militants into Syria, while continuing airstrikes against the group's targets in Iraq. Obama said the United States would arm and equip Kurds, Iraqis and Syria's moderate opposition in an effort to eradicate IS extremists.