For the Win – Russia Triumphs in Tank Biathlon 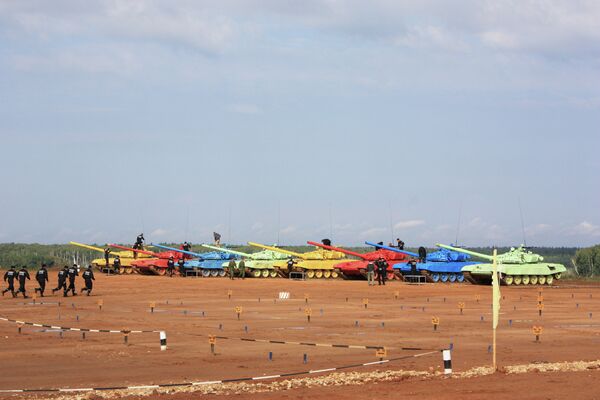 © RIA Novosti . Yekaterina Zgirovskaya
Subscribe
International
India
Africa
Russia’s latest military invention – a tank biathlon pitting ex-Soviet states against each other – is an assault on the senses, especially on hearing.

The racing field dwarfs the 40-ton machines and is clouded by smoke. The announcer’s deep voice struggles to cut through the booming guns and whistling signal rockets, and the engines’ roar is deafening as brightly-painted killing machines thunder past, each leaving a plume of dust in its wake.

The idea is pretty simple – just like a regular biathlon, only with tanks.

The Russian military unleashed this new sport on the world this week, delivering an event that was part sales pitch, part post-Soviet bonding exercise.

“I don't know how we did it. Just sat there in the machine going all out, thinking, the whole of Russia is watching us,” Pvt. Igor Artemyev, the Russian team’s driver told RIA Novosti after the race. His left control lever stopped working, and he pulled his machine through while maneuvering with a single track, the 19-year-old conscript – a round-faced, sturdy fellow with the wholesome looks of a rustic fairytale hero – said.

To the spectators however, Russia’s crimson T-72B seemed to breeze through the racing ground like it was a Saturday morning trip to a supermarket.

The crew commander in Kazakhstan's blue tank sprained his arm handling the main gun shell. After a replacement was found it bounced back, coming in second, just under a minute after Russia. Belarus finished third, Armenia last.

“It was new to us. We've done all these exercises before, but never at the same training run,” Kazakh gunner Aidyn Kalioldin told RIA Novosti after the race. “The Russians handled it better. But we would have won if the race had taken place in Kazakhstan,” Kalioldin added with a smile.

All four teams at Alabino training grounds outside Moscow on Saturday competed in T-72Bs, the staple tank of all post-Soviet armies and a close relative of the T-90, Russia’s main export tank.

Like any good show, it started with a warm-up: Out on the field several heavy war machines of the same model – though not the performers – executed elaborate maneuvers. Incongruously, the host talked like he was at a ballroom dance contest, though there was an apocalyptic grace to this “tank ballet,” as he put it.

Each lap was 6,100 meters (3.8 miles) long and included a scarp, ford, minefield and bridge. The tanks must complete the lap without losing speed or overturning.

During the first lap, each fires its main gun at a target from a distance of 2,200 meters (7,200 feet), which is close to their maximum range. Then it is the machine gun that sees action, and then flanking fire at three consecutive targets. Ammo is loaded onto the tank at the firing line each time. There is no slack – no extra shots are allowed and every miss costs the team a 500-meter penalty lap.

Crucially – to keep the event sporting – they are not allowed to fire at each other.

The military made an effort to entertain. The superfinals came complete with fireworks, music and dance shows, and a display of old Soviet tanks, cars and state-of-the-art military training equipment.

Children and adults jostled to get their picture taken with what looked like a real rocket launcher.

But the vibe was like that at a pro wrestling match organized by the Soviet Union.

The adrenaline-filled event called for scantily clad cheerleaders, hard rock, beer and an announcer frothing at the mouth with excitement but came up short on all counts.

Instead, there were yawning gaps between events, punctuated only by officials’ sleep-inducing speeches.

Any metal band would surely sell their souls for the chance to play this gig, but the live soundtrack to the event sounded prehistoric. Some of the Soviet tunes played were so old that one explicitly praised Stalin.

At times the announcer imitated the booming “this is Moscow calling” style of World War II-era radio host Yury Levitan, but this inevitably fell flat when he had to deliver a running commentary on tanks rolling through obstacles in the haze.

The 3,000 spectators were mostly a hand-picked assortment of former and currently-serving soldiers who were invited along with their entire families. No tickets were on sale to the public.

“Who knows what would happen if we just let anyone in,” army spokesperson Nikolai Dolyushkin told RIA Novosti.

Not many saw it coming, since tank forces have hardly been a priority in Russia over the past two decades. Plans to scale back the tank force from the current 20,000 to just 2,000 tanks were reported in 2010 by news agencies citing Defense Ministry sources, though never implemented.

The development of cheap anti-tank weapons and the tendency toward small-scale conflicts arguably eliminate the need for clashes between massive tank armadas, Ruslan Pukhov of the Center for Analysis of Strategy and Technologies told RIA Novosti on Friday.

However, the experience of actual wars of the two past decades in the post-Soviet space (including two Chechen wars, the clash between Armenia and Azerbaijan over Nagorno Karabakh in the early 1990s, and the Russian-Georgian conflict of 2008) all showed that tanks are still relevant, Pukhov said.

Russia remains the world’s biggest exporter of battle tanks, the Moscow-based Center for Analysis of Global Arms Trade says. So this tank biathlon appeared to be an entertaining if unconventional sales pitch, Pukhov said.

“We’ll do our best to ensure that foreign armies buy our tanks in the future,” Shoigu said, announcing the event last week.

Forty-six military attaches from embassies in Moscow were invited, the Defense Ministry said, and most showed up, many with their families in tow.

US, Germany – Bring it On

Shoigu also said that the United States and Germany, Russia’s rivals on the arms exports market, were invited to bring their own tanks to compete against Russia next year.

After Saturday’s race, the US and German military attachés both said that their respective superiors are still deciding whether to accept Shoigu’s invitation, though the German officer sounded excited about it.

Shoigu previously claimed that US Secretary of Defense Chuck Hagel had approved US participation in 2014, but Colonel R. Taft Blackburn, US Army Attaché in Russia, said this was not the case.

“It is an interesting idea, but there are many issues at stake,” was all that Blackburn said when asked by RIA Novosti whether the Pentagon is considering the risk that Russia could interpret US unwillingness to take part as weakness.

Blackburn then beat a hasty retreat into the VIP stand, as an Armenian tank thundered past.