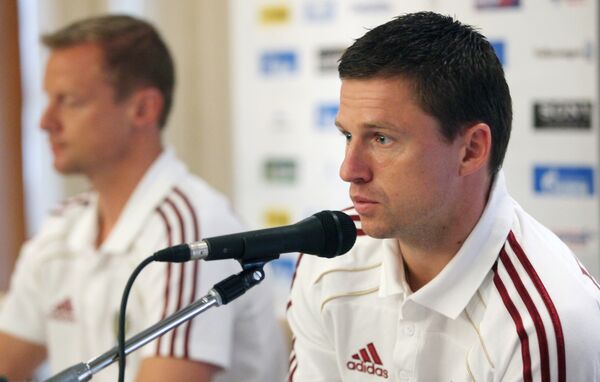 Russia midfielder Igor Semshov talks to RIA Novosti about his frustrations with the alignment of the Russian football season with Europe's winter leagues.

Russia midfielder Igor Semshov talks to RIA Novosti about his frustrations with the alignment of the Russian football season with Europe's winter leagues.

Igor Semshov: We’re professional players and want to play in decent conditions, not the ones we’re forced into. Everyone wants the Russian championship to grow and stand side by side with European leagues, but now it's clear that it's not growing but getting worse. I as a footballer am getting worse, because it's hard to demonstrate anything on these pitches. And what enjoyment does the spectator get out of the kind of football that we're forced to play? You need to look the truth in the eye, and for some reason we're running away from the truth. To play decent football, and for fans to come to the games, we need decent conditions.

I get the impression that people are starting to change things with absolutely no knowledge of the climatic conditions. And they don’t know what country we live in. Take for example the dates of the first round of matches in the championship this year. It was obvious about the presidential elections for ages. And we couldn’t decide when to start. It’s a circus. And when someone says that the players are going too far with their comments, I feel like answering: ‘And which of us has to suffer on the field? The players or the people making the decisions?’

Take the training process. Look at the pitch we train on at the base in Novogorsk. What training can we do on that? It’s an outrage, not football. But in a month’s time the season will end and all the players will go on holiday. The pitches will be green, the weather will be good. But the pitches will just sit there unused, and the players will be tanning themselves in the sun. Utter nonsense. I think a lot of other players share this opinion. Especially the ones whose teams play a passing game.

Now everyone has a television and everyone can see what they play on in the Champions League and European national leagues. They play on green pitches, but we play on brown ones. And the people managing our football are surprised that we make such pointed remarks. It’s worth noting that everyone wants our league to grow, to be able to compete with European leagues. But we’ve managed to get our championship shown occasionally in Western countries. And when they look at pitches like this, who’s going to take us seriously?

Those proposing the calendar switch argued that it’s better to play the games in the middle of the season in bad weather, rather than the crucial games at the end.

Well, now we’re going to play the last games in May. Even by May we won’t have decent pitches. How can they get better in time for May if we’ve already wrecked them in March? When the root system for the pitch is already completely torn out. I think that by May the grass will only be starting to appear, but we’ll be finishing the championship.”

Organizers have said that this March and early April have seen unusual weather that only happens once every few years.

It’s hard to predict climatic conditions. But anyway, when you know our country’s climate and understand that you only get constant temperatures above zero in April… Recently we’ve actually played most of our games in sub-zero temperatures rather than positive ones. Do we have winter football in Russia then? ... There have been cases when they’ve played when it’s minus 20, like in Tomsk in 2008. I’ve been at football games in England when they’ve cancelled the game at five or 10 degrees. That’s an example of respect for the players and the fans. Here they’d just play it anyway, it’s not important how.