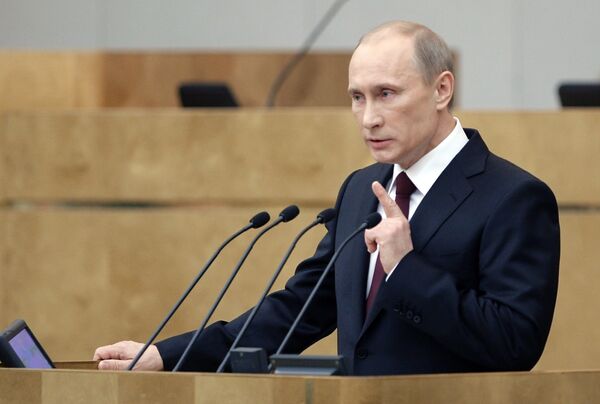 Russia needs to be strong and avoid experiments with "unjustified liberalism" in order to safeguard its sovereignty and prevent outsiders from dictating the country's development, Prime Minister Vladimir Putin said on Wednesday.

In an annual address to parliament - his last as prime minister before legislative elections later this year and presidential elections early next year - Putin painted a glowing picture of his government's performance in 2010, stressing achievements ranging from economic growth to new infrastructure and social development.

Putin set out an array of far-reaching goals that he said should see Russia emerge as one of the "top five global economies" within the next 10 years.

"In the modern world - if you are weak - there will always be someone who wants to come and advise you on what direction you must move in, what policies to pursue and the path you should choose for your own country," Putin said. "We must be independent and strong."

The powerful Russian prime minister, who some analysts believe will bid to return to the Kremlin in 2012 and succeed his hand-picked successor, President Dmitry Medvedev, outlined a bullish agenda for Russia's future political and economic development.

Putin did not directly criticize Medvedev, who is generally regarded as the more liberal figure in Russia's governing tandem. But in his wide-ranging address, the prime minister made clear he had a clear vision about how Russia's government should be run in the future and peppered his arguments with words often associated with his successor.

"The country needs a decade of stable, calm development, without going to extremes one way or the other, without ill-conceived experiments, confusion over sometimes unjustified liberalism or social demagogy," the 58-year-old prime minister said, his comments frequently applauded by the lawmakers.

Referring to a policy centerpiece of Medvedev's administration - innovation - Putin said that acquisition of modern technology and know-how from abroad was useful up to a point but stressed investment at home would be decisive in achieving Russia's development goals.

"That is the source of innovation," Putin said.

Russia will have to at least double labor productivity in the next decade, something that has lagged behind since the Soviet era.

The level of foreign direct investment in Russia should increase to $60-70 billion "in the foreseeable future," Putin said.

Russia has emerged from the global financial crisis in far better shape than most countries and will completely offset economic crisis-related losses by the start of 2012, before moving on to new achievements, Putin said.

The capitalization of Russia's stock market has exceeded $1.1 trillion, which is "the best result among BRICS countries," Putin said.

"It is the main source for covering the Pension Fund deficit," he said. "This policy will leave us room for maneuver, give us financial independence and ensure us against possible risks, which are plentiful," he said.

It is essential to secure peace inside the country and prevent any attempts to split Russian society, Putin said in the wake of protests and coups that have swept the Middle East and North Africa in the past few months.

Putin promised increases in pensions and other social payments, as well as higher spending on education and science. He also pledged to stop Russia's population decline, provide greater support to young families and better healthcare.

Putin emphasized the need to strengthen Russia's defense capability, modernize and upgrade weapons, including in the Navy and the Air Force, saying missile production will double from 2013.

Upgrading the Air Force and air defense systems will be a priority in the development of the Russian Armed Forces in the near future, he said.

"Anti-aircraft missile brigades are already receiving new S-400 [SA-21 Growler] systems," Putin said. "In the future, the production of S-500 systems will be started. They are capable of meeting air defense and missile defense tasks and destroying targets in near space," he said.