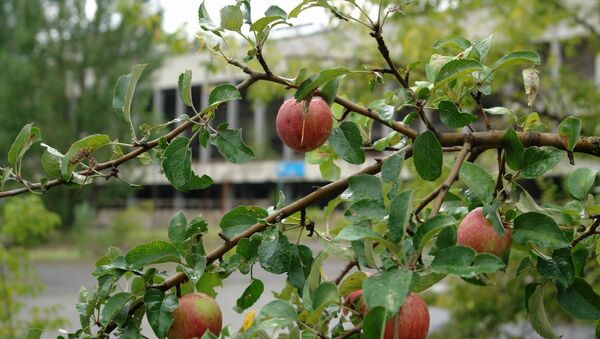 Ukrainian officials are studying the possibility of growing crops in the 30-km zone of radioactive pollution near the Chernobyl Nuclear Power Plant, the site of the world's worst nuclear disaster, a popular Russian daily said on Friday.

Ukrainian officials are studying the possibility of growing crops in the 30-km zone of radioactive pollution near the Chernobyl Nuclear Power Plant, the site of the world's worst nuclear disaster, a popular Russian daily said on Friday.

A number of Ukrainian services and departments are conducting numerous studies to establish "areas that could be used for agriculture, some partially and some in full," Nezavisimaya Gazeta quoted acting head of the Ukrainian Emergencies Ministry Mykhailo Bolotskykh, as saying.

An explosion at the Chernobyl nuclear power plant in 1986 resulted in highly radioactive fallout in the atmosphere over an extensive area. A 30-kilometer (19-mile) exclusion zone was introduced following the accident.

Vast areas, mainly in the three then-Soviet republics of Ukraine, Belarus and Russia, were contaminated by the fallout from the major nuclear meltdown. Some 200,000 people were relocated after the accident.

The agriculture revival plan, initiated by the European Union, proposes cultivating rapeseed, also known as canola oil and widely seen as the most popular primary product to produce biodiesel, in the contaminated area. Similar plans have earlier been voiced by Belarus, another country severely affected by the Chernobyl disaster.

"This crop has great potential, with the European Union, the U.A.E., Turkey and Pakistan expressing their readiness to buy it from Ukraine. This is really profitable," a source close to the Ukrainian government told the newspaper.

"The problem is that rapeseed depletes the soil. It may be grown only as part of a five-year crop rotation cycle. Or, it may be grown on lands which have no agricultural importance," he said.

The paper quotes an expert as saying that scientists have developed mechanisms of rehabilitating nuclear-polluted soil, which include growing certain crops and combining various types of fertilizers.

"Experiments show that... areas where rehabilitation measures were conducted can produce crops with almost normal radionuclide levels, hundreds of times lower than those where such measures were not taken," the unnamed scientist told Nezavisimaya Gazeta.

But many experts say that any attempt to cultivate crops in Chernobyl is "simply a crime," saying that many dangerous isotopes buried in soil could be released back into the air and water when the polluted soil is ploughed.

"It is simply a crime - increasing air and water pollution by turning over polluted soil," a former official with the country's radiation and ecology watchdog said.

The plan is expected to be officially announced in March 2011, shortly before the 25th anniversary of the Chernobyl disaster.