The tip of the needle: Russia’s escalating HIV epidemic 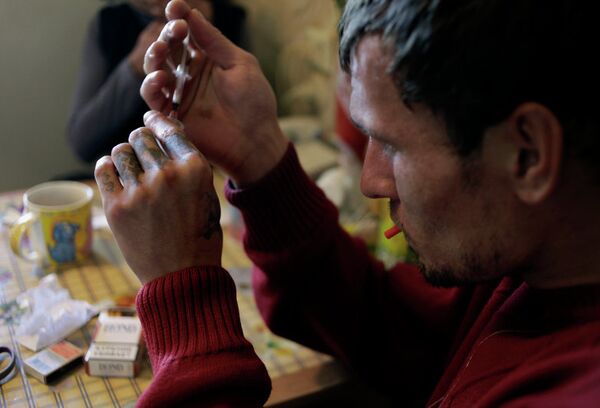 © RIA Novosti . Diana Markosian
Subscribe
International
India
Africa
On a dimly lit street in north Moscow, two drunk men kill time outside a local pharmacy as they wait for the arrival of clean syringes so they can shoot up.

On a dimly lit street in north Moscow, two drunk men kill time outside a local pharmacy as they wait for the arrival of clean syringes so they can shoot up.

“I need three,” one of the men says to an outreach worker as he opens his backpack and pulls out a bag of clean syringes.

“Every time I see them, I remember myself,” says Maxim Malyshev, 33, who is HIV-positive and injected heroin into his body for 15 years.

“When I am out on these runs, I try to talk to these guys as much as possible,” he goes on. “No one else talks to them; I know, I used to be one of them.”

Drug addiction was virtually unheard of, publically at least, until the collapse of the Soviet Union, when borders opened up and narcotics flooded in.

The number of drug addicts in modern-day Russia is estimated to be 500,000, according to government statistics. However, the Federal Drug Control Service believes the actual figure to be at least five times higher.

“I started six years ago,” says Maria, now 27, as she probes the surface of her skin with a needle.

“I don’t really know why," she continues, as we sit in the chaotic apartment she shares with her boyfriend. "But now I can’t stop.”

Across the table, her boyfriend, who refuses to reveal his name, his arms and hands covered in the intricate coded markings of prison tattoos, prepares his fix carefully, his eyes narrowed in concentration.

Injecting drugs is the major cause of the spread of HIV in Russia. A report by the United Nations Office on Drugs and Crime (UNDOC) estimates that 30,000 people a year are dying from drugs, more than the total number of soldiers killed in the almost decade-long Soviet military campaign in Afghanistan.

The Russian government estimates that as of 2009 more than 530,000 people out of a population of about 142 million are living with HIV. But the actual number is estimated to be double that amount, according to the global UNAIDS organization.

“The Russian government does not agree with the estimated number of HIV infected people generated by UNAIDS,” he says. “That is why we cannot rely on these estimates, and must work with the numbers that are officially registered.”

With the global community focused on HIV/AIDS in Africa, Russia isn’t an obvious front line in the fight against HIV. But across Eastern Europe and Central Asia, experts say drug use is driving the world’s fastest-growing HIV epidemic.

“The growth of AIDS has gone beyond being a medical problem,” Deputy Prime Minister Alexander Zhukov said at a recent meeting in Moscow “It has become an issue of the strategic social and economic security of the country.”

After being virtually silent on the issue for many years, the Russian government recently announced a major HIV/AIDS initiative including a dramatic increase in funding. The country is expected to invest more than $430 million in global healthcare before 2012, Prime Minister Vladimir Putin said at 60th session of the European regional committee of the World Health Organization.

But not everyone is convinced of its commitment to dealing with the problem’s root causes.

“The problem is that all the investment is done for the sake of Russia’s political image,” says Anya Sarang, president of the Andrey Rylkov Foundation. “We are not a poor country, we are in the G8, we are civilized, but no investment is being put into HIV prevention within the country’s most vulnerable groups.”

She also noted that Russia refuses to adopt “internationally proven” means of treating opiate addiction such as methadone, a heroin substitute.

Russia believes that the West’s policy of supplying methadone to addicts simply exacerbates the problem and does little to prevent the causes of drug addiction. It similarly disapproves of needle exchange programs, claiming that they are a tacit approval of the low level crime that funds users’ habits.

Over the years, NGOs – largely funded by international donors like the Global Fund to Fight Aids – have plugged enormous gaps that the Russian government has failed to fill. They have poured in more than $365 million to prevent and treat HIV.

But a five-year grant provided by the Global Fund to Russian Health Care Foundation expired at the end of August last year and more than 40 prevention programs, most of them aimed at drug users, have expired. The Global Fund has not approved new funding, claiming Russia is no longer eligible for HIV and AIDS funding.

“Of course, the Global Fund has its own criteria for allocating grants,” says Zohrabyan of UNAIDS.

“Russia is also becoming more of a donor country rather than a recipient country. But, does the Russian government allocate enough money for HIV prevention? No.”

The problem of a lack of funding for HIV prevention and the absence of the political will is echoed by experts in the field.

“The problem is stigma,” says Mikhail Volik, regional director of Aids Foundation East -West, a Dutch non-governmental organization, which works to treat and prevent HIV. “They don’t want to acknowledge that the problem exists, but this is the first step to dealing with the epidemic.”