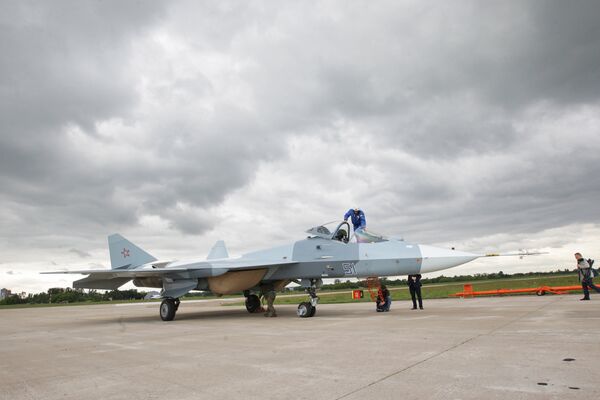 Russia's Defense Ministry will order at least 50 fifth-generation fighters from 2016, a senior official said on Thursday.

"At the first stage, there will be dozens of planes, more than 50," said Vladimir Popovkin, deputy defense minister for arms procurement.

He was on hand as Russian Prime Minister Vladimir Putin observed the test flight of a prototype fighter and later talked to the pilot, Sergei Bogdan, who said it was the fighter's 16th test flight and more would follow shortly.

Popovkin said that based on the outcome of initial tests, the Defense Ministry would purchase the first six to 10 aircraft after 2012.

He said the fighter will be superior to U.S. analogs.

"The requirements we are setting on this plane are well above those for the U.S. fifth-generation aircraft," he said.

Putin said the Russian fighter will be about three times as cheap as its foreign analogs.

He said, factoring in modernization and upgrades, the fighter will have a service life of 30-35 years.

As Putin climbed into the cockpit of the plane, Bogdan began telling him about the aircraft's unique features, in particular the yoke that was very convenient, especially during overloads.

"I know, I have some flying experience," Putin said.

In 2000, then acting president Putin co-piloted a Sukhoi-27 Flanker fighter jet from Krasnodar to Chechnya's capital of Grozny ahead of presidential elections.

Russia has been developing its newest fighter since the 1990s. The country's top military officials have said the stealth fighter jet with a range of up to 5,500 km should enter service with the Air Force in 2015.