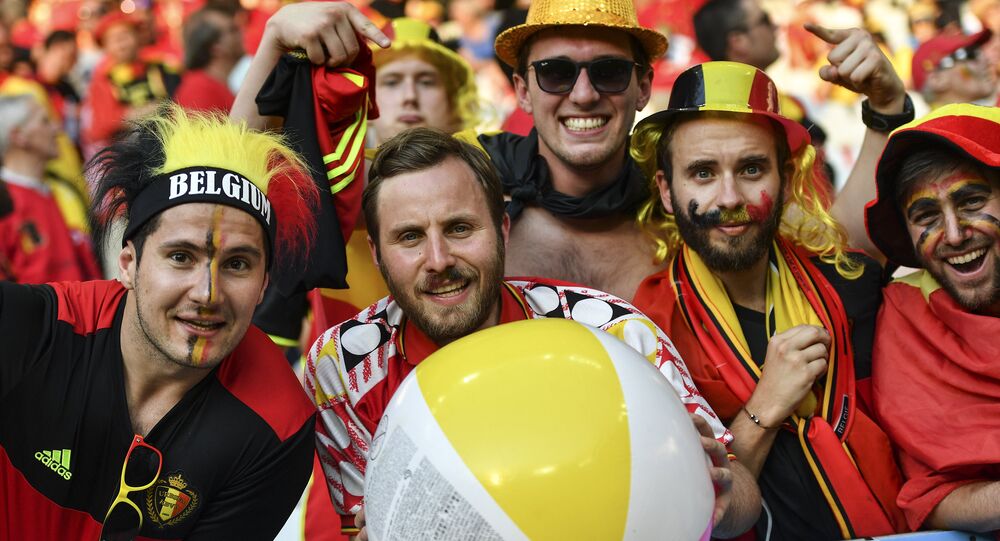 With the 2018 World Cup just round the corner, Sputnik has looked at some of the many written recommendations being made available to those who plan to come to Russia to watch world football’s premier event.

Freezing temperatures, Soviet-style architecture, lousy Wi-Fi and good security – these are the characteristic features of Moscow according to the popular Brazilian website globo.com.

It offers potential visitors a long list of traditional Russian mores which include, among other things, a tacit ban on leaving empty bottles on the table, whistling indoors and shaking hands over the doorstep.

© Sputnik / Grigoriy Sisoev
UK Police Call on Football Fans to Avoid Provocations During 2018 FIFA World Cup
When in Russia, the website warns, make sure to take off your shoes when entering someone’s house and your gloves before you shake someone’s hand.

One should also be careful not to talk politics or crack jokes about the family, which may get you in trouble. And never ever lick the knife when you are eating.

Brazilians like doing to do so, but in Russia this would look a bit strange.

Booze is a popular subject and Brazilian journalists devote a whole article to how hard drinks will be sold during the Mundial, including in diners.

Drink carefully, eat the traditional Russian cabbage soup (Borscht) and give your seat to someone older than you, especially if you’re on public transport, the London-based tabloid The Sun warns would-be fans.

“Russia might not be far away, but it’s a whole different world, so we’ve put together a guide for you on what you’ll need to know to get along with the locals, as well as eating and the all-important national drink – vodka," the paper writes.

© Sputnik / Alexei Danichev
US Fans Booked Most FAN IDs for FIFA World Cup in Russia - Russian Communications Ministry
Apparently not content with just giving advice to those who will be over for Russia’s first World Cup this summer, the Sun recently published a strange-looking series of photographs of the gritty underworld, featuring bare-knuckle boxers, black-eyed pensioners and tattooed football casuals on the streets of the Russian capital snapped by Belgrade-born photographer Boogie.

The Times cites British police as warning England fans not to display the flag of St. George at next month’s World Cup in Russia because it risks being seen as “imperialistic” and “antagonistic.”

England aficionados are advised to be especially careful when attending the England vs Tunisia game in Volgograd.

The most surprising recommendations, however, are contained in the Argentine Football Association's booklet meant for players, coaches, executives and reporters who would be heading to Russia for the 2018 World Cup in June, on how to have a chance with Russian women.

On May 16 the football league authority stated that "part of the presented material had been published by mistake and had never been planned to be included into the booklet” and said it had ripped out the offensive pages.

Russian cities do not really differ much from cities found anywhere else in Europe. They are friendly and guest-loving. Just come over and see for yourselves.