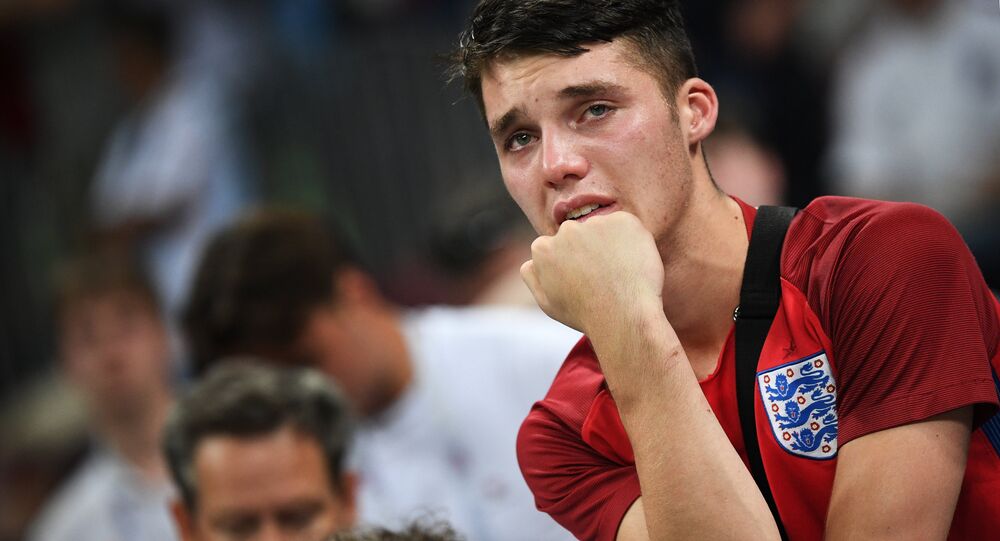 Another World Cup Dream Disintegrates: It's Not Coming Home After All

Like a little child that has to let go of a balloon in the park, England fans have had to abandon their insatiable thirst for first place. England will now fight for third against Belgium on Saturday - but sadly for them, they’ll be no Cup "coming home."

The World Cup has dodged the nest that England built and instead will be going home to France or Croatia. Croatia's 2-1 win against England is the only thing that has managed to pull the plug on the ceaseless mantra of England fans: "It's coming home, it's coming home, it's coming home." The phrase was uttered so frequently in the lead-up to the semifinals that even British birds seemed to have been tweeting it. The hearts of England beat together, drumming the lyrics "It's — com — ing — home."

There exists a psychological phenomenon when a phrase is repeated so often that it appears to lose all meaning. It's called semantic satiation. What used to make sense, becomes a sort of auditory gloop of meaningless sounds. That's what happened with "It's coming home" for the rest of the world. It translated into a senseless gloop of patriotism. While pesky at times, the Russian locals loved it. Ekaterina "Katya" Dryomova, from Kaliningrad, praised the way England colorfully celebrated their team. "I love the songs that England [fans] sing, the English are so funny!"

For England, the phrase was used as a lucky mantra. So keen on bringing the cup home, they thought maybe they could summon enough desire to will it home. Thrown around in jest at first, the phrase soon became a comical lyric of hope and support for the squad. After all, this squad managed to bring them further into the tournament than they'd been in 22 years.

© Sputnik / Ramil Sitdikov
Tunes of the Tournament: 'Football's Coming Home' and Beyond
Wishing the cup home, in such a loud and riotous way, at times can come across as a little bolshie. So much so that the rest of the world united in bemusement when they lost it all. A Libyan fan rejoiced outside a stadium, chanting in glee: "Anyone but England! Anyone but England! England didn't win!' He's not alone in that sentiment. Now, all eyes are turned toward England fans, as they proceed through the five stages of grief, light-heartedly mourning their ejection from the tournament.

The Five Stages of Grief:

Denial: When Croatia's Mario Mandzukic scored the winning goal in the 109th minute, England was sure that their team would take it back. "Don't worry," said Steven from Somerset, as the match moved into the final four minutes of extra time. "They'll bring it back, I know they will." He repeated that until the final whistle, at which point, his face visibly fell.

Anger: Exiting Luzhniki Stadium directly after the match in Moscow, it seemed the joy had been sucked from the souls of the England fans, to be replaced by tepid anger.

"Get that mic out my face you tw*t," said an anonymous England fan. Perhaps a few England supporters require a bit of practice on how to lose graciously.

Bargaining: Speeding through Moscow's underground tunnels on the metro, a cluster of fans begin to chant for a rematch. If Colombia can do it, then so can they! But Croatia won fair and square, and this little crowd of hopefuls know it. The chant soon peters out, and the group try to redeem a little of their patriotism. "I'm England till I die! Coming home or not, I'm England till I die!"

© Sputnik / Ramil Sytdykov
Fans Take to Twitter to Vent After Croatia Beat England at FIFA World Cup
Depression: "I am so, so gutted," says Callum from Middlesbrough. "I will not be going to work on Monday, but it's for all the wrong reasons." Callum orders another beer, it's his fifth one since watching England lose in the flesh. "I'm just thankful that there are still restaurants open at 2 a.m. in Moscow. Look at this cheese board. It's all I have to live for right now." Callum, a melodramatic queen, digs into a mound of cheese, and takes a long swig of beer, with a pained expression on his face. Outside, we watch a child being carried by his father on a long walk home. The kid has the St. George flag painted on his face. It's streaked with tears.

Acceptance: Surprisingly, a fair few England supporters have already reached this stage. Taking their loss on the chin, one fan makes the best of England's dying mantra:

"It's not coming home! But we are, and the Cup will eventually. The better team won this time," says Michael from Kent. "Gareth Southgate is a great manager; the team is fantastic. They are just a bit young, a bit inexperienced, but they'll do it in eight years."

It has been a disappointing trip for those who flew to Russia for the semifinals — all they have seen is England lose, and it's cost them quite a few bucks to do so. Now, they're hanging on to the hope that they might see England win third place against Belgium, in St. Petersburg on Saturday.

England has already celebrated four triumphant matches in Russia, battling it out in five Russian cities: Volgograd, Nizhny Novgorod, Kaliningrad, Samara and Moscow. For the fans that have been to some, or all of these matches, the blow of England's loss has been softened by the memories of their travels. New friends from all over the world send messages of condolence and promises to meet in Russia, or elsewhere, "sometime soon." So, in dedication of the fans that have been on the Russian road for a month: Na Zdorovie! and to the host country, Spasibo!

It's not the cup we're looking forward to now; it's a bloody cup of tea. England, we're coming home. Soon.

Britain Beware? 'We May be Drunk - but We Ain't Hooligans!' (PHOTO, VIDEO)

Football Crazy, Football Mad: How Far Would You Go to See England Play?