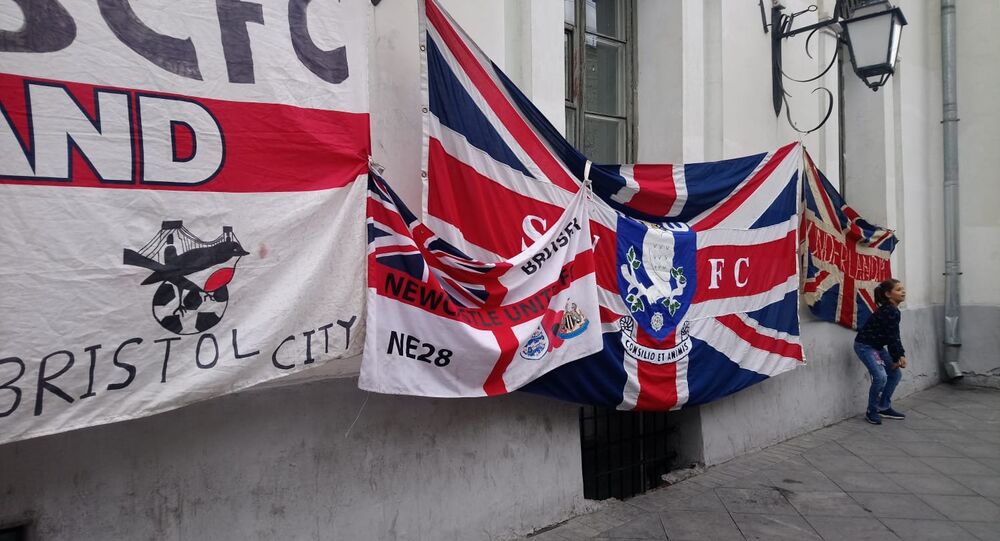 Britain Beware? 'We May be Drunk - but We Ain't Hooligans!' (PHOTO, VIDEO)

Once again, Britain is stirring up the political soup, jumping to blame Russia for another nerve agent attack in Amesbury. It comes as thousands of England fans travel to Russia to witness England play in the semi-finals. Fans have been urged to stay on guard, but how do the fans in Russia feel about that?

The statement released by the UK foreign office urges citizens to be ‘vigilant', if travelling to Russia for the World Cup tournament. British political animosity toward Russia is reaching new heights, as the UK government wastes no time in blaming Russia for an 'attack' in the UK, a poisoning that has left a 44-year-old woman dead. The Kremlin has denied any involvement in the incident, deeming the allegations ‘absurd'. Despite that, the UK Defense Minister has called on the world to 'unite' and condemn Russia.

Meanwhile, in Moscow, the world is uniting- but it's not in condemnation of Russia. The world is uniting in a countrywide carnival as fans cheer on their favorite teams. Included in the festivities are thousands of Britons who have been travelling around Russia since mid-June. Thousands more England fans have just arrived in Moscow, to witness England play Croatia in the Semi-Finals in Moscow on Wednesday.

​These fresh-faced football fanatics are full of energy, sounding up the central ‘Street of Lights' with their raucous singing. Their songs can be heard from a mile off, a noisy reminder of England's newfound presence in the tournament. A crowd of onlookers gather round, pointing their smartphones to preserve a glimpse of the English in action.

"These guys are not the hooligans, they're just drunk. The real hooligans are sitting in a bar down there, minding their own business. They don't want to cause trouble, they just want to enjoy the football."

© Sputnik / Vitaly Timkiv
Lost in Google Translate: England Fans Struggle With Language Barrier
That's Gary, a self-proclaimed ex-hooligan that has flown to Russia for the Semi-final. He's not overly keen to be interviewed, but he's adamant that the English here are not wanting to cause trouble. The rest of the revellers are ready to agree. It's true, the crowd is noisy, but they're all in a good mood, playing up to the cameras. Nevertheless, the police are on standby, keeping the lid on the loudest bunch on Moscow's Nikolskaya Street.

Gary gestures to a bunch of twenty-somethings who have started to take down an umbrella in the café. The police come running, and the culprits get a mild scolding. The café owners scowl and pack up the umbrella. ‘No problems here', says Liam, from the West Midlands. He's keen to dispel the idea that the England fans are looking for trouble. And in a way, he seems slightly sad about the reputation that England have abroad.

​"We Britons get a bad rep. Yes, I've ‘ad a drink. Yes, we're singing songs. I don't really care where I'm from. Well, I do, cause I'm English- and it's coming home. We're not bad people, we just wanna have a good time, have a drink. As everyone does. Moscow, Spain, Brazil, Croatia. I'm not fussed. Just a good time. Good people, good food. Let's have a good drink. Let's have a good party!"

Everything's good in Liam's world. As it is for the rest of the revellers too. Passers-by look bemused, and queue up to take photos with the flags the English have brought along and strung up along the wall. ‘It's funny isn't it- how people celebrate. Some of these flags are very old. They really care about them, and they are really proud!'- Diana from Moscow has coupled up with an England fan, they've been together since the start of the tournament, but she doesn't know what will happen to the relationship when the tournament ends. 'I will probably go and visit England. I have always wanted to see it, I am scared that I am not welcome, but everyone is so lovely here, I'm sure they'll be nice there too.'

Vasily, another Muscovite, stands apart from the crowd, smoking. He wholeheartedly agrees. ‘I have made friends from England. They say their government has been telling them not to come to Russia. That it is unsafe.' He can't quite believe it, and asks whether or not it is true. ‘In the end, I have friends that travel the world. He says that everywhere he goes, the people are the same. They want peace, they want happiness. A nice salary. We are human everywhere. Maybe it is the governments that are trying to make us hate one another.'

© Sputnik / Maksim Bogodvid
Wherefore Art Thou, WAGs of the World Cup?
In this football environment, when the beer is flowing, the adrenalin pumping, with a near overload of testosterone, there's always opportunity for trouble. If trouble comes, however, it will not likely be ordered by a government, nor will it be hordes of hooligans looking for a fight. It's more likely to involve small scuffles among overexcited revelers. That's why, when travelling, it is always important to be vigilant, respectful and humble. But from talking to this crowd, it seems that most already know that, and they don't need a warning from the Foreign Office to remind them. The only thing these Brits might need to work on is being a bit more humble- the volume of their ‘England!' — and ‘Footballs Coming Home!' chants seem to increase dramatically whenever a group of Croatians pass by.

​Nikolai from Moscow doesn't believe that the warning from the British Foreign Office was necessary: "Not many British people came here because they were told not to. I don't think it is dangerous, because the security measures are very tough now. There is no danger for British citizens."

It's true, that even if the fans chose not to be vigilant, the police lining the pavements are cocked and ready to take the ‘vigilance' into their own hands. Even so, apart from the umbrella incident, that's not been necessary yet. The overwhelming feedback is that although the political sentiment between the nations may be tarnished, the English and Russian peoples are getting along beautifully. They are wary, however, that as accusations fly between the UK and Russia, these new-found friendships could become strained.

'Our Fandom is More Than Skin Deep'- England's Illustrated Men