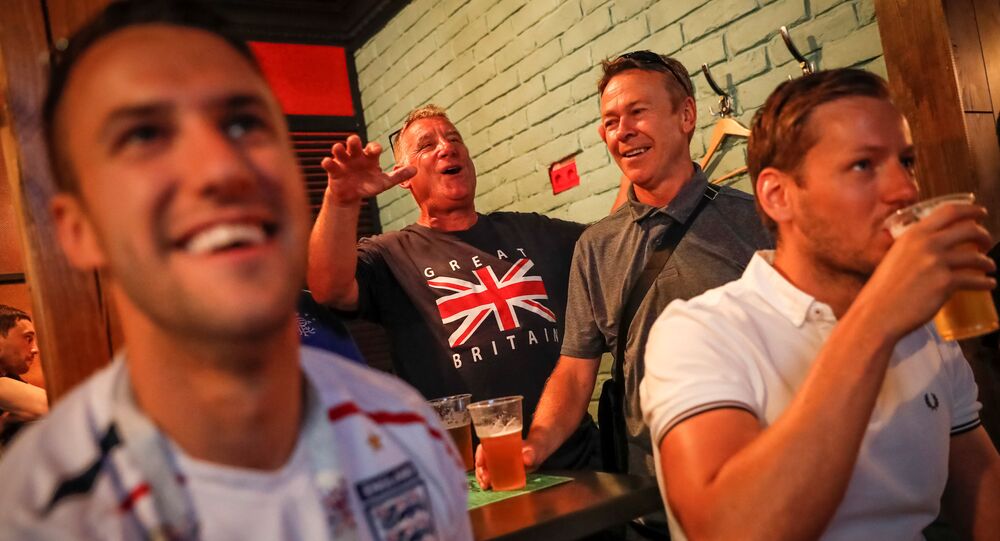 Tricking Ticketing System: England Fans Get Spontaneous for a Glimpse of Game

Football fans have discovered a legal loophole that allows them to enter Russia without a visa. But while the hack has convinced a few more England fans to bite the bullet and fly to Russia, it's anticipated that the stadium will have a fair few empty seats.

England has made it to the quarter-finals, which means many devoted fans are convinced they'll be "going all the way."  As a result, some of the supporters that had avoided traveling out to Russia are now keen to jump on the bandwagon and cheer on their team. It could be a welcome zest of life for the English side of the tournament, which has been somewhat lacking in numbers. For the fans that have been in Russia since the start, voices hoarse from cheering for an entire nation, some fresh faces (and voice boxes), could be welcome.

For many of these World Cup virgins, the decision to fly out to Russia was a spontaneous one. When Eric Dier sunk the last penalty and secured England's win against Columbia, Liverpudlian Mark Cowan bought tickets to Russia on the spot.

"It wasn't a hard decision to make, I had wanted to be at that game so badly, I figured I might as well not make the same mistake again when they play against Sweden. I've got to be there, so I can cheer my team all the way home!"

Though the decision may have been easy for Cowan, buying a ticket and ensuring entry into Russia had to pose some challenges. Russia has a notoriously fiddly visa process, though the rules have been relaxed a bit over the World Cup, to allow an easier route into the country.

Visa-free entry to Russia is permitted for fans in possession of a "Fan-ID." This document allows supporters with a ticket to a match to gain almost instant access onto Russian soil. The process of obtaining one of these "golden tickets" is very simple: A quick online form and violà, the gateway to Russia is opened. The only hitch is that the application needs a ticket reference number to be accepted.

"Now, I didn't have a ticket, and there were none available on the FIFA website for people within the UK. I had to create a proxy to trick the system into thinking I was in Ireland, so I was able to buy one. After that, I applied for the Fan-ID and I got it almost instantly. I printed it out, laminated it — and here I am!"

By "here," Mark Cowan means a train station in Ryazan, somewhere between Moscow and Samara, where the match will be played. It is one of the few stops on the fourteen-hour overnight train where passengers are able to get out and stretch their legs. On the train are a handful of rogue England fans, most of whom have newly arrived in Russia for the quarter-finals.

Intense overnight train experience. Pictured below: Some are making the 14 hour journey home after a week of work in Moscow. Some are heading out to #Samara for #SWEENG- All are getting merry. pic.twitter.com/IdVQYlrYxl

Oliver Cross, from Brighton, is one of them. He used a slightly different tactic to get to Russia, tricking the Fan-ID system. He's come all the way without a ticket in his pocket; instead, he bought a "memorabilia" ticket from eBay for a fiver, and used the ticket number to apply for a Fan-ID.

This method worked just as well but posed a significant risk. Should the authorities have wanted to check his non-existent ticket at the airport, Oliver could have been denied entry into Russia. Now, Oliver claims he will buy a ticket for the game in Samara, where supposedly they are easy to find.

"I found out about the trick from the British newspapers- they were all publishing stories about the fake ID hack, saying it was dangerous. It worked for me, I think the authorities are quite keen to let people into Russia to fill the stands."

It's true that there is no shortage of tickets for the upcoming match. On Thursday, around 2,000 tickets became available on the FIFA website, a result of the dismissed Colombian fans getting knocked from the tournament. Swedish and English fans are represented in small numbers, when compared with the quantity of Colombian supporters who had traveled to Russia.

The head of tourism for the Samara region, Mikhail Maltsev, has predicted that 3,500 England fans will be in Samara for the match, far less than the estimated 5,500 Sweden fans. Even with the influx of quick thinking England fans who, like Oliver and Mark, decided to travel out for the quarterfinals, the stadium could see a large number of empty seats on game day.

Various social media group chats connecting English fans in Russia have been riddled with offers of tickets to the match. "I've got a mate selling a Sweden v England ticket, tell your friends"- writes JB Dean. Dean's mate is not the only one selling. The chats that have previously been plagued with desperate pleas for tickets are now seeing a surplus. "Please keep me in mind if you find a spare ticket for Colombia v England- I'll pay good cash"- has now turned into "Sweden v England, front seats, half price."

Of the whole tournament so far, the Sweden v England match has the highest number of tickets still available for purchase, though the Kazan stadium has also seen a poor turn out, with just 80% of seats filled for Friday's Brazil v Belgium match. This ticket surplus is not to be expected for matches held later in the tournament. Forward-thinking fans, full of optimism, are already searching for tickets for the final. Played in Moscow, the final will doubtlessly be a sell-out, regardless of which two teams make it to the end.