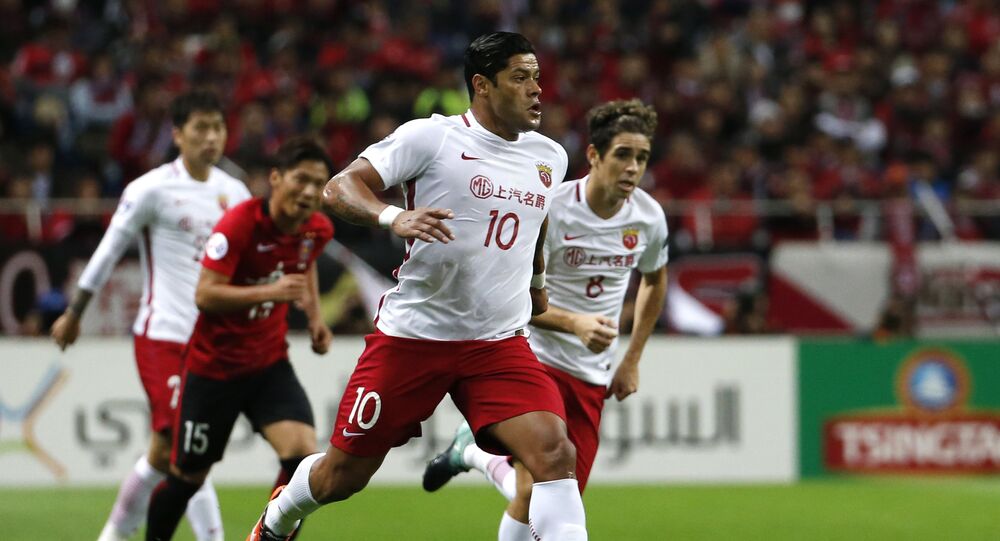 Givanildo Vieira de Sousa, a forward of Shanghai SIPG and ex-forward of Zenit Saint Petersburg, also known as Hulk, told Sputnik China of the conditions for fans at Russian stadiums, Brazil's chances of winning, his life in Russia and whether professional football has a concept of "friendship".

Sputnik: Many Western fans are concerned about their security during the matches.  Are their concerns justified?

Hulk: I think that such concerns are quite normal, just because the fans don't know Russia. I've spent four years in Russia and I've never come across any violence. Of course, the Russians are really energetic fans. But you need to know that the World Cup is an event with a high level of security, so there aren't going to be any accidents. Brazil's World Cup went off well; there were no accidents and nothing bad happened to foreign citizens. I'm sure it's going to be the same in Russia.

Sputnik: You played for Zenit Saint Petersburg and you know Russian stadiums. What can the fans expect from the stadiums?

Hulk: As the World Cup's in summer, the weather should be good for such an event. All the stadiums are new; I've played at some of them and some of them I've seen. I'm sure that infrastructure-wise, everything will be alright. I think it's going to be a cool World Cup with great infrastructure that suits both sportsmen and sports fans.

Sputnik: What are Brazil's chances to win this year? What teams do you consider the favorites?

Hulk: Of course, Brazil has a chance. Brazil is always a strong rival with regard to the World Cup. However, the World Cup teams are traditionally at their best: such teams as Argentina and Germany; Spain is also a strong player right now. So I think one of those four teams is going to win — Brazil, Germany, Argentina or Spain.

READ MORE: Beware of Belgium: The Red Devils Are Dark Horses Who Could Win The World Cup

Sputnik: You are one Brazil's 2014 players that that wasn't invited to play for Tite's team. What's your take on that? Are you sort of hurt or does everything happen for a reason?

Hulk: Brazil has a lot of strong players and the coach's choice should be respected. I'm good playing in China; I'm trying to achieve my best results. Our club did well during last season and hopefully, this year's going to be even better. This is the coach's choice; we should respect it and support the team.

Sputnik: Axel Witsel said in his interview that you were close friends while playing for Zenit. Perhaps, it's hard to have close friends in your profession — today you play for one club and the next day you're in another country. Do you manage to keep up friendships?

Hulk: Sometimes you make friends for 20-30 years. Sometimes you know someone for a year or two and you become close friends. We were very close with Witsel; he was my best friend in Zenit. Everybody in the team was my friend but I was especially close with Witsel. I have friends in FC Porto who I still keep in touch with, they're my true friends. This is the essence of football. We make friends that we won't lose even in different clubs; like Fredy Guarín who's playing for Shenhua, our main rival; I have many friends there. But when the match begins everyone's protecting their team, I'm to fight for Shanghai SIPG and Witsel's going to fight for Tianjin Quanjian FC.

© Sputnik / Ilya Pitalev
Accreditation Deadline for Journalists Extended Ahead of FIFA World Cup
Sputnik: What country was the hardest to adapt to, China or Russia?

Hulk: Life-wise, everything was great. I enjoyed living in Russia and I adore living in China. I've made lots of Russian friends and I'm making friends in China. I think that was a good experience.

Sputnik: You've mentioned that you don't speak Chinese. Have you managed to learn any Russian having spent 4 years there?

Hulk: I've learned some everyday phrases but that's very hard. Moreover, there was always an interpreter which can kind of [let you] relax. The same is [true] here, I came here and I didn't have to speak to Chinese coaches myself. It's hard to learn a language when you don't practice it.

Sputnik: In his interview, Witsel said that if he ever returned to Russia he would only play for Zenit. What about you?

Hulk: I would for sure play for Zenit!