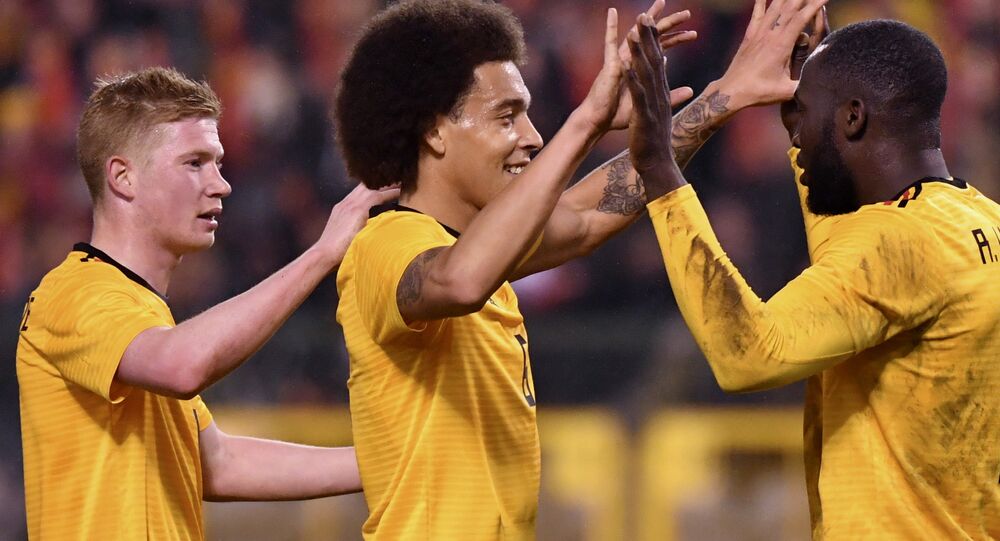 Beware of Belgium: The Red Devils Are Dark Horses Who Could Win The World Cup

The World Cup kicks off in just over two weeks' time with the eyes of the footballing world on Russia. Sputnik's Chris Summers looks at how the draw could pan and predicts a new name on the trophy.

The hosts Russia, kick off the FIFA World Cup on June 14 against Saudi Arabia and the Moscow authorities are promising a "festival of football."

Russia, and before them the Soviet Union, have been perennial achievers with their best performance coming in 1966 when a Soviet team, with the peerless Lev Yashin in goal, made it to the semi-finals before succumbing to West Germany.

Since the break-up of the Soviet Union, Russia have not fared well in World Cups but they can expect the usual boost that being hosts gives teams.

In 2002 joint hosts South Korea made it as far as the semi-finals before bowing out to Germany.

Russia have been given a fairly easy group which they should be able to win.

Will Mo Salah Be Fit To Play?

The runners-up place should be between two teams who both have star players who are head and shoulders above their team-mates — Mo Salah's Egypt and Luis Suarez's Uruguay.

Salah arrived in Spain on Wednesday, May 30, for treatment for the dislocated shoulder he suffered during the Champions' League Final on Saturday, May 26, but if he does not recover fully expect Uruguay to progress at the Egyptians' expense.

Russia could then take on Portugal in the knockout stages as Cristiano Ronaldo's team are likely to be runners up to the talented Spanish team.

Portugal were the surprise package at the 2016 European Championships in France but their team, including Ronaldo, is ageing and Russia may be able to use home advantage in Sochi to get through to the quarter final.

But that is as far as Russia can expect to get, as France will probably stand in their way, having topped their group and then overcome Nigeria or Croatia in the knockout stage.

That quarter final will take place in Nizhny Novgorod, a city east of Moscow which Napoleon never managed to reach during his infamous invasion of Russia, but expect a French victory and plenty of Russian tears on July 6.

Brazil had a terribly World Cup as hosts in 2014, being drubbed 7-1 by the eventual winners Germany in the biggest humiliation they had ever faced.

But Neymar, who was unfit for that game, is set to be back and firing on all cylinders in Russia and they should win their group at a canter, with Serbia possibly pipping the Swiss for second spot.

The holders, Germany, should also win their group but expect surprise runners up — South Korea have a team full of players with plenty of experience of European top echelon football and they should be able to overcome Mexico and Sweden, who are nowadays without the class of Zlatan Ibrahimovic.

Brazil, backed by a colorful army of fans, should be able to beat South Korea in the knockout stage while Germany should be too strong for Serbia in St. Petersburg.

England On Course To Meet….Germany!

And then to England's group.

England's World Cup qualification got off to the worst possible start when manager Sam Allardyce quit in September 2016 after just one game in charge after being accused of using his role to negotiate a deal worth £400,000 (US$532,000) to represent a Far East firm.

But Gareth Southgate — a former defender who famously missed a penalty which led to England being knocked out of Euro 96 — took over and steered England through qualification without losing a match.

England fans have low expectations of the team though and will probably be happy to qualify as runners up behind Belgium, who they meet in their third and final match.

That would mean a meeting in the knockout stages with Poland, who are expected to top Group H, which is arguably the weakest group of the lot.

England, with Raheem Sterling out to impress after his rifle tattoo controversy, should be able to beat Poland at the Otkrytie Arena in Moscow.

But it is impossible to see England being able to overcome their old enemy Germany in the quarter final.

And Then There Were Four…

So expect Germany and France to be joined in the semi-finals by Argentina, who can win their group and overcome Denmark and then Spain, and Belgium, who are the competition's dark horses and will claim the scalp of Brazil in the quarter final.

That would see Argentina and Germany clash in one semi-final in Moscow while France and neighbors Belgium fight it out in St. Petersburg in the other game.

France have a good all-round team with top players throughout the team but I fancy Belgium to overcome them while the solid Germans will march past Argentina who, with the exception of Lionel Messi, are fairly average.

The last person to find the net at the tournament was, of course, 🇩🇪@DFB_Team_EN’s Mario Gotze in the 2014 Final 🏆#WednesdayWisdom pic.twitter.com/bsZWDExhrd

So the final at the Luzhniki Stadium in Moscow on July 15 could be between Germany and Belgium.

Germany have won the World Cup four times and are trying to draw level with Brazil, who have won it five times.

Is It Time For The 'Golden Generation'?

But Belgium's Red Devils have been dubbed the "golden generation".

In 1986 a team which included quality players like Jan Ceulemans, Enzo Scifo and goalkeeper Jan-Marie Pfaff, made it to the semi-finals before losing to Maradona's Argentina.

Belgium are a 10-1 shot with bookmakers Paddy Power, compared to joint favorites Brazil and Germany on 9-2, Spain at 11-2 and France at 6-1.