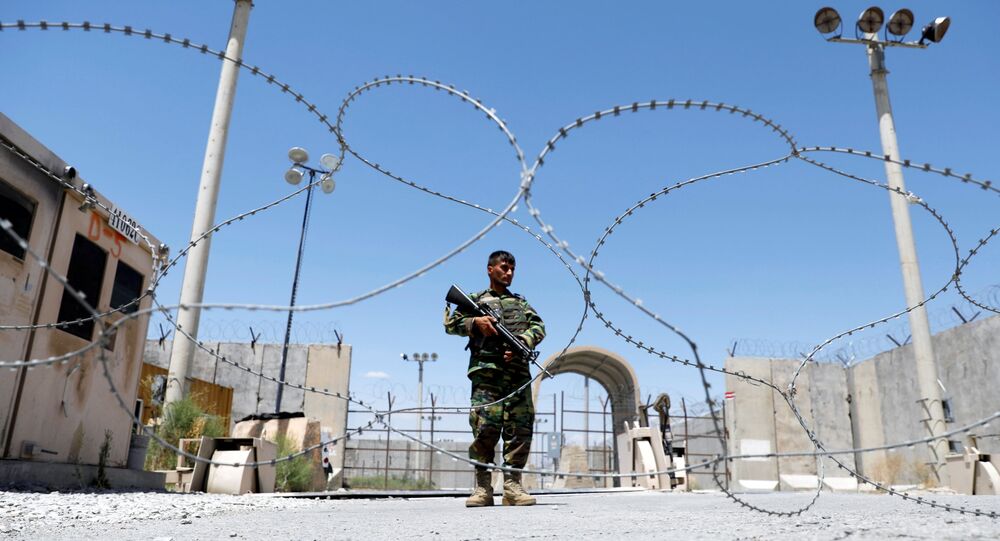 As the US-led coalition nears the September 11 deadline for its pull-out from Afghanistan, the Taliban reportedly seized control of some 85% of territory within the country, according to a Friday statement issued by the militant group. The Taliban's issuance has been dismissed as propaganda by some.

However, any external assistance should not interfere with internal Afghan government matters, Mohib emphasized.

"We do not need to replace one superpower with another, peace and stability are possible only in the case of cooperation with everyone in the region and beyond, but we call on external partners to help our defense and security forces fight terrorism, for which they are intended, and not interfere in our internal affairs," the Afghan national security adviser said.

"We welcome technical support from all external partners, of course, from China, India and Russia."

Mohib went on to assert Afghan authorities have recognized the Taliban's right to exist as a legitimate political force, not a "monopoly," alongside other groups within Afghanistan.

The Afghan government's pleas come alongside the Taliban's celebration of allegedly claiming 85% of territory in Afghanistan.

Speaking during a Friday news conference in Moscow, Russia, Taliban official Shahabuddin Delawar declared "you and the entire world community have probably recently learned that 85% of the territory of Afghanistan has come under the control."

Friday alone, members of the movement overtook the border town of Islam Qala, and the Abu Nasa Farahi checkpoint - both key territories along the Afghan-Iranian border.

Delawar also vowed to take operational measures to ensure Daesh* does not re-emerge in Afghanistan.

A number of military experts have argued that a less rushed pullout by US President Joe Biden and his administration could have curbed the Taliban's now-actively growing influence in the region.

US Air Force Lieutenant Colonel Karen Kwiatkowski, a former analyst for the US Department of Defense, told Sputnik it was unlikely that Afghanistan's existing government would survive the next several months.
© Photo : Afghan President's Office
Afghan President Arrives at Bagram Airfield Week After US Evacuation - Photos

"Although there should be a rush by select political groups and individuals to join or buy in politically with the controlling Taliban, and some Kabul former US allies could remain and be useful to the Taliban, as it seeks to end the civil war and get on with an economic recovery and peace," Kwiatkowski qualified.

According to the US intelligence community, Afghanistan will collapse within six months of the US-led coalition's withdrawal. Such estimates have led other countries, and even Americans, to question the abrupt timeline of Biden's pullout.

"The situation is rapidly deteriorating," announced the Russian Embassy in Washington, DC, speaking of stability within the region. "We attribute it to the hasty pull-out of the U.S. and other NATO countries' troops."