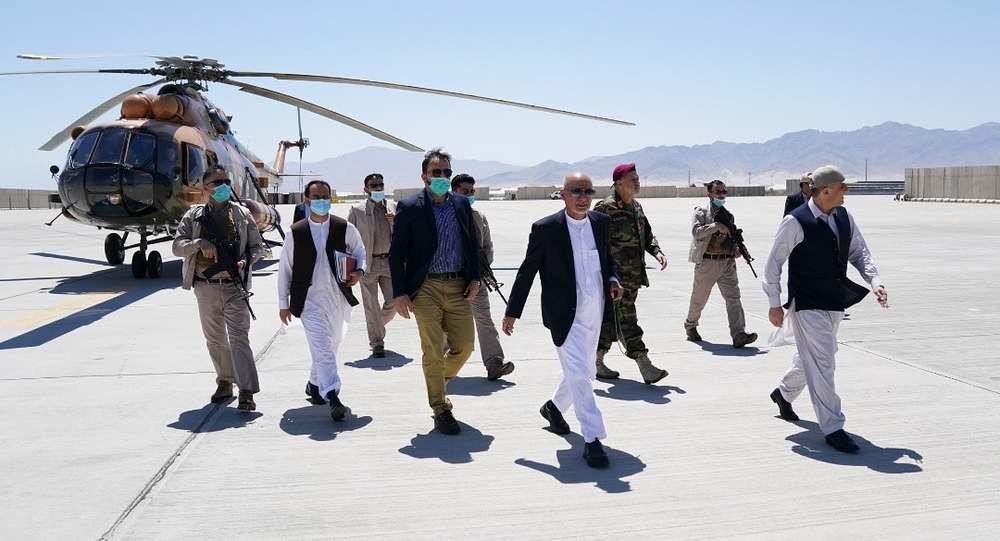 On Thursday, President Joe Biden announced that the US would complete its withdrawal from Afghanistan by 31 August, nearly two weeks before the previously set 9/11 deadline. On Friday, the Taliban announced that it had taken control of some 85 percent of the war-torn nation's territory.

Afghan President Ashraf Ghani toured Bagram Airfield on Friday, one week after the major facility was formally handed over to Kabul's jurisdiction after the withdrawal of US forces.

Saleh tweeted that he was "deeply impressed" by the professionalism of the Afghan army officiers who took charge of the base.

US forces left Bagram - Afghanistan's largest airbase, on 2 July as part of their wider ongoing withdrawal from the war-torn country. The base, situated north of Kabul, became the main base of US forces in Afghanistan after the 2001 invasion. Before that, it was heavily used by Soviet forces during the 1980s war against US-sponsored jihadist militias.

© Photo : YouTube / Documented Madness
US Military Vehicles Falling Into Taliban Hands at Alarming Rate, Report Finds
Before the evacuation, US forces brought trailer truckloads of scrap from destroyed vehicles and other equipment to the base to be sold off, with some Afghans complaining that the equipment should have been transferred to Afghan security forces instead of being scrapped. US officials have said that equipment needs to be destroyed to prevent it from falling into the hands of Taliban fighters. Last week, Sputnik reported that hundreds of military vehicles have been falling into Taliban hands in recent weeks as entire battalions of troops disband without a fight in anticipation of an imminent collapse of the central government.

Kabul has said that it has received equipment worth some $1 billion amid the US and NATO withdrawal.

On Friday, a Taliban delegation visiting Moscow to discuss the possibility of intra-Afghan talks told reporters that 85 percent of Afghanistan is now under its control. Government officials in Kabul dismissed these claims. Also Friday, Afghan security officials confirmed that militants captured a key border crossing with Iran after having previously overrun border areas with Tajikistan, Turkmenistan, China and Pakistan.

© AP Photo / Border Troops of the State Committee for National Security of the Republic of Tajikistan
Some 1,500 Afghan Soldiers Escaped Taliban to Tajikistan in Two Weeks, CSTO Envoy Says
On Thursday, Moscow expressed concern about the escalation of the situation in northern Afghanistan, and urged the parties to prevent the conflict from spreading abroad, including into the territory of the Russian-allied states of Central Asia. The Taliban delegation confirmed their interest in achieving a sustainable peace, providing assurances to Russia that the group would not violate the borders of its northern neighbours.

In a press conference in Moscow on Friday, the visiting Taliban delegation indicated that they do not seek to "dominate" the whole of Afghanistan, and that their aim was to free the country from foreign occupation and create a "free Islamic state system" based on dialogue. The group promised to tackle the heroin trade which boomed under the US occupation, guaranteed the safe movement of commercial cargoes in areas under their control, called on foreign humanitarian organisations to continue their work in Afghanistan, and reiterated that they would not allow Daesh (ISIS)* militants to operate in the country.

​The group also demanded the lifting of all foreign sanctions against them, and promised not to harm translators who had worked for US occupation forces. The delegation even claimed that the Taliban would "guarantee" the rights of women, including regarding education and employment, "if this does not contradict Islam." Only time will tell whether these promises will be kept.

** The Taliban is deemed a terrorist group by Russia.