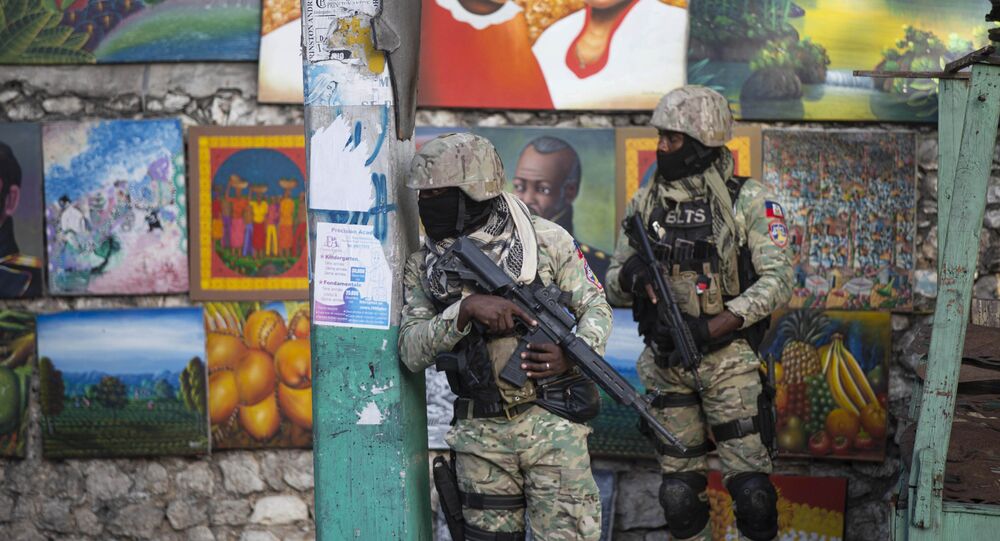 A day after Haitian President Jovenel Moïse was killed by gunmen at his house outside Port-au-Prince, Haitian National Police (PNH) have apprehended several suspects and killed several more. Mathias Pierre, Haiti’s minister of elections and inter-party relations, said the commando behind the assassination had 26 members.

Speaking at a press conference on Thursday, United Nations Special Representative of the Secretary-General for Haiti Helen La Lime said that few facts were known about the assault on the Moïse's house in the Pelerin neighborhood of southern Port-au-Prince that killed the president and wounded his wife, Martine.

"A number of arrests have been made as the police are working very hard to arrest the commando that entered the compound and attacked the President and the First Lady,” she said. “What I have now is that in the last 12 hours, the four members of the group that raided the presidential residence have been killed by the police, while another six are now in police custody,” she added.

On Thursday afternoon, PNH Chief Leon Charles announced police had captured the final suspects behind the attack and were now looking for the masterminds.

"So far we have arrested six people for their alleged involvement in the assassination of President Jovenel Moise, four others have been eliminated, of which three are foreigners," Charles told reporters. However, according to local news reports, the PNH had detained two other people as well, bringing the total to eight arrested.

Charles later said seven members of the hit squad had been eliminated.

According to Pierre, one of the men arrested is a US citizen named James Solages. Pierre told the Washington Post he believed another suspect was also Haitian-American, but gave no specifics. The US State Department has not yet verified Soalges' American citizenship.

Video filmed of the hit squad assembling outside Moïse's house just before the assault shows them claiming to be agents of the US Drug Enforcement Agency (DEA), a US federal police agency, in an apparent ruse to disarm Moïse's guards. Haitian Ambassador to the United States Bocchit Edmond dismissed the notion they could have been DEA agents in Wednesday comments to Sputnik.

Pierre also said later on Thursday that the commando consisted of 26 people, and La Lime further added that officials in the Dominican Republic, which shares the island with Haiti, couldn't confirm if any of the perpetrators had escaped into the country.

A crowd had formed Thursday outside the Port-au-Prince police station where the suspects were being held. PNH chief Charles appealed to them and the broader public for calm in a television address.

“The special units are trying to protect the police station, because the population is very mad and is trying to get to them, to burn them,” Pierre told the Post. “We’re trying to avoid that.”

La Lime added Thursday that acting Prime Minister Claude Joseph, appointed by Moïse earlier this year, would remain the country's de facto leader for now. She urged the need for unity in the country and cautioned that things were too unstable for elections to be held at the moment. "Stakeholders need to set aside their differences and to chart a common way forward and overcome this difficult moment in a peaceful manner," she urged.

The UN envoy said both presidential and parliamentary elections were expected to hold their first round on September 26, with a second round sometime in November. Prior to his death, Moïse had ruled by decree for more than a year after allowing parliament's mandate to expire without further elections, and his own presidential term was ruled by the Superior Council of the Judiciary to have expired in February, although he claimed he had another year left.

The US backed Moïse's claims, prompting mass protests demanding the Biden administration drop its support for Moïse and that he step down and call elections.

In the aftermath of Moïse's killing on Wednesday morning, Joseph declared a two-week-long state of emergency, giving police wide-ranging powers to hunt down the assassins. He also declared a 15-day period of mourning for the slain 53-year-old president, who had ruled Haiti since 2016.