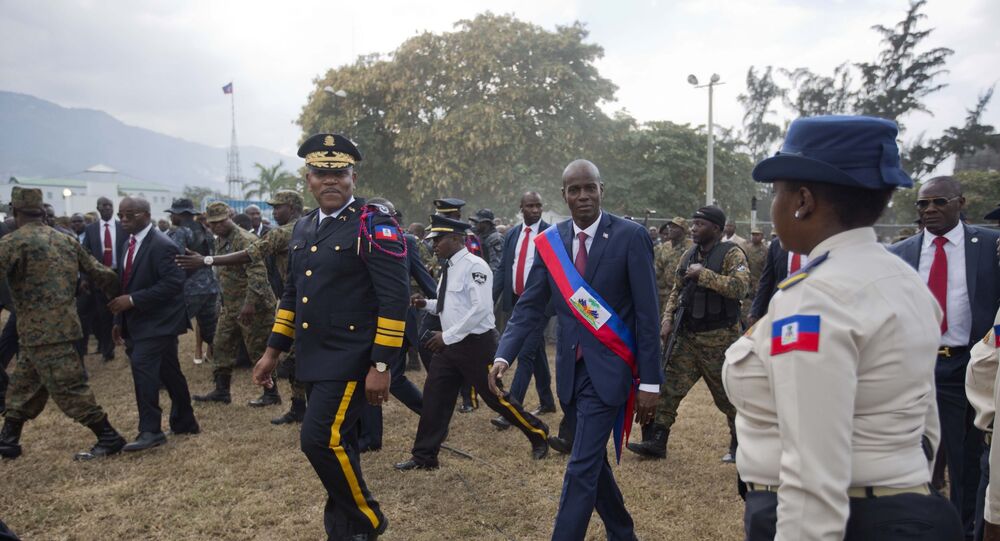 Haitian Secretary of State for Communication Frantz Exantus said Wednesday evening that the "alleged assassins" of Haitian President Jovenel Moïse had been apprehended. Moise was slain by armed gunmen at his home outside Port-au-Prince early Wednesday morning.

Exantus said the suspects had been arrested in the Pelerin neighborhood around 6 pm Wednesday evening by the National Police and promised more information would be forthcoming.

Haitian Ambassador to the United States Bocchit Edmond told Sputnik that "some of them" had been caught and were being interrogated, implying they believe others remained at large. No officials have given any estimate as to how many suspects there are.

Two presumed suspects in assassination of @moisejovenel detained by PNH in #Haiti this afternoon pic.twitter.com/LPAJ95zqKS

​Claude Joseph, the country's acting prime minister and de facto leader following Moïse's death, said the army and police have the president's killers surrounded and were engaged in a firefight, with four "mercenaries" shot in addition to the two that had been captured.

The PNH chief told reporters that three police officers had been held hostage by the gunmen but had been freed. He pledged that all the gunmen would be either killed or captured.

Their arrest comes just hours after Joseph announced a two-week-long state of emergency giving police widespread powers to hunt down the assassins.

Moïse, 53, was killed by a group of gunmen early Wednesday morning at his private residence, also in Pelerin. Eyewitness reports have claimed the men identified themselves as US federal agents from the Drug Enforcement Agency (DEA), but Edmond rejected this assertion, saying the killing had been "carried out by foreign mercenaries and professional killers - well-orchestrated." Joseph also said on Wednesday afternoon that some of the suspects spoke Spanish and English.

His wife, Martine, was severely wounded in the attack and was rushed to Miami, Florida, where she is in stable but critical condition at Jackson Memorial Hospital.

Mass protests have swelled across Haiti since early 2021, when Moïse rejected a court ruling that his presidential term had expired and claimed he had another year left, due to his inauguration taking place a year later than initially scheduled after voting irregularities forced a redo. However, he had already ruled by decree for more than a year after he refused to schedule new parliamentary elections and the old legislature's term expired. Protesters faced down deadly violence from police and armed gangs as they demanded Moïse step down and that the US end its support for him.

US President Joe Biden called the killing a "heinous act," saying he was "shocked and saddened" by the news.

"The United States offers condolences to the people of Haiti, and we stand ready to assist as we continue to work for a safe and secure Haiti," Biden added. The US has intervened repeatedly in Haiti over the past century, overthrowing multiple governments and occupying the country with US troops while supporting pliant rulers amenable to US business interests. Haiti was the second European colony in the Western hemisphere to break free of European rule after the United States and the first ruled by African former slaves, who won their independence from France in 1804. However, while their revolution provided a potent example to African slaves in other European colonies, it terrified the governments that were based upon slave-owning and slave-trading classes, and Haiti became an international pariah and was blocked from further economic development.

Haiti Has Video Footage That May Be Clue in Moise Assassination Probe, Envoy to US Says