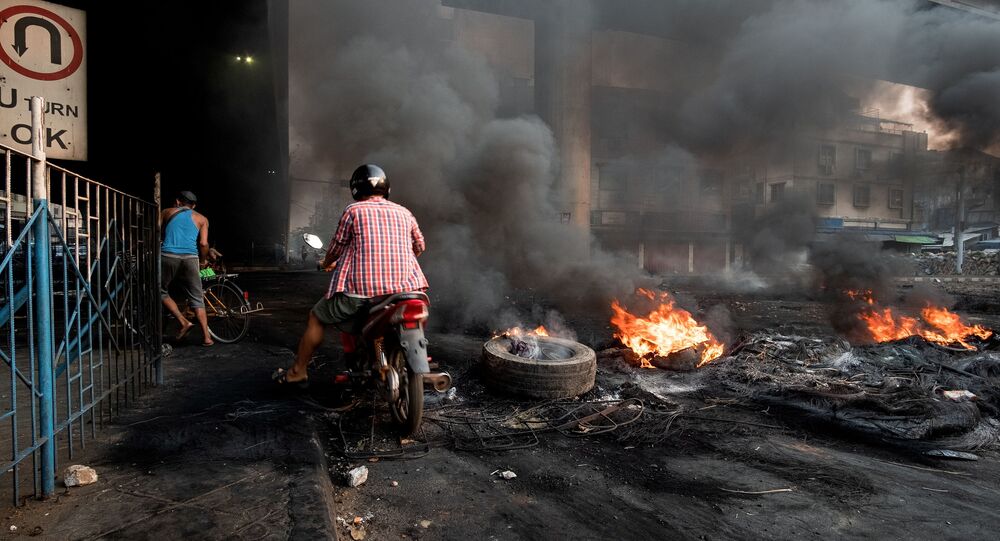 West Wants Myanmar to be Ruled by Its Marionettes, Commander-in-Chief Says

MOSCOW (Sputnik) - The US and Britain previously imposed sanctions on the Asian nation, while the UN General Assembly adopted a draft resolution calling on all countries to stop selling weapons to Myanmar.

The West wants to control the people in charge of Myanmar, Min Aung Hlaing, the commander-in-chief of the country's armed forces and chairman of the State Administration Council, has told Sputnik in an interview.

According to the military leader, the ambivalent perception of the recent events in Myanmar can be put down to the West's intention to "destroy our state".

"The second reason is that they want to have in power people who are under their control", Min Aung Hlaing said.

© REUTERS / STR
Protesters march with makeshift shields on a main road during a demonstration in Mandalay, Myanmar, Monday, March 8, 2021. Large protests have occurred daily across many cities and towns in Myanmar.

"At the beginning there were protests. You know the reason behind them — the rigged elections. After that, the protests entered the stage of terrorism, and other reasons are at play here", Min Aung Hlaing said.

The Myanmar military (also known as the Tatmadaw) took power on 1 February, accusing the National League for Democracy (NLD) of committing voter fraud. They detained Cabinet leader Aung San Suu Kyi and her government and vowed to transfer power after a new election, whose date has yet to be decided.

Commenting on the February takeover, the commander-in-chief noted that the military had no intention of putting off the new vote in the country but it is necessary to finish investigating violations during the previous election and to provide new documents for people.

"After implementing measures necessary for organising the vote, we will definitely hold new fair elections. What measures are needed? There are two points: the announcement about violations of the law and falsification of ballots in the previous elections ... After 1 February, a new union election commission was formed, which focuses on investigations. When the probe is completed and an official announcement is made, this is one of the measures that should be implemented. We cannot hold new elections without these investigations", he explained.

Aside from that, according to the military leader, it was revealed that "some people do not have passports".

"This is why falsifications were possible, around 10 million falsifications. Among them, about four million [are related to] people not having passports. This is a flaw on the part of the government. This is what we said, so now we have to do it. We need a year and a half, 18 months to issue passports ... We must carefully consider everything and issue all passports. This takes time as well", Min Aung Hlaing noted.

"We are not deliberately delaying, this is all due to the fact that we are taking the necessary measures to organise new elections," the senior official said.

According to him, the rules for parties won't be changed for the upcoming election.

"Absolutely all political parties can participate in the election in accordance with the rules. We are not changing these rules and will not invent new ones. Everything will remain as it was", Min Aung Hlaing assured.

The Case of the Ex-Government Chief

He also noted that only a court can decide the fate of ousted Cabinet head Aung San Suu Kyi.

"I am not a judge. I cannot say what will happen. I cannot give any orders on what to do with her. Judges will take care of that, in accordance with the law, and then judges will decide what will happen to her, as the law requires it", Min Aung Hlaing concluded.

The detained politician faces several charges which are not linked to alleged election fraud. The prosecutors have accused her of accepting a $600,000 illegal payment and more than 11 kg of gold, importing communications equipment and breaking the National Disaster Law.