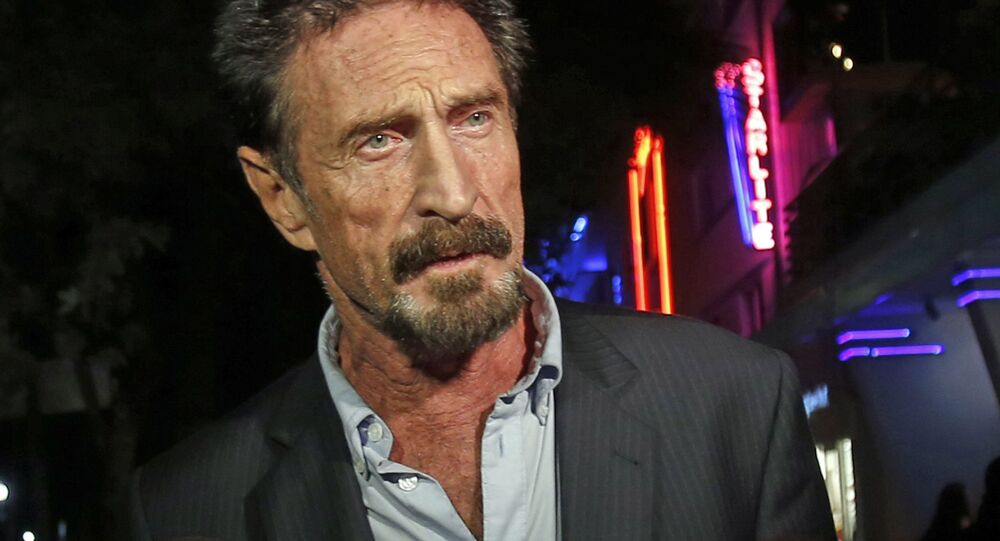 Earlier, the Spanish National Court ruled in favor of extraditing John McAfee, the founder of the McAfee antivirus software, to the US over tax-related criminal charges that were filed by prosecutors in Tennessee.

Officials with the Justice Department in Catalonia confirmed on Wednesday that John McAfee was found dead inside his jail cell, hours after the Spanish High Court ruled in favor of extraditing him to the US.

Sources with knowledge of the development told local outlet El Periodico that McAfee had committed suicide, and that prison staff attempted to resuscitate McAfee without success.

Authorities with the department have indicated that signs suggest McAfee died as a result of suicide, but that an investigation into the incident is presently ongoing.

McAfee had been held at the Brians 2 Penitentiary Center in Spain's Barcelona since late 2020, as he awaited the judge's ruling in his extradition case. Spanish outlet El Mundo reported that the mogul had been held in the facility's module 1 wing.

© AP Photo / Joan Mateu
Entrance of Brians 2 penitentiary center in Sant Esteve Sesrovires, near Barcelona, northeast Spain, Wednesday, June 23, 2021. John McAfee, the creator of the McAfee antivirus software, has been found dead in his cell in a jail near Barcelona, a government official has told The Associated Press. Earlier Wednesday, a Spanish court issued a preliminary ruling in favor of his extradition to the United States to face tax-related criminal charges. Security personnel at the Brians 2 penitentiary near the northeastern Spanish city tried to revive McAfee, who was 75, but the jail's medical team finally certified his death, the regional Catalan government said.

Incidentally, McAfee previously tweeted in November 2019 and later in October 2020, days after his arrest, that if he ever dies by "suicide," it wasn't done by his hand.

The 75-year-old antivirus software founder had initially been detained by Spanish law enforcement officials in October 2020 while at the Barcelona airport. Earlier this month, McAfee testified in court that the tax-related charges filed in the US were politically motivated, and that if he were extradited back to the US, he would remain behind bars for the rest of his life.

An indictment filed by prosecutors in Tennessee and later publicly released by the US Department of Justice (DoJ) in October 2020 alleges that McAfee attempted to "evade" the US Internal Revenue Service by  "concealing" assets, such as real estate property and a yacht, by placing them in the name of "others."

The offenses reportedly took place between 2014 and 2018.

Additionally, it's worth noting that the DoJ release came after the US Securities and Exchange Commission filed their own charges against McAfee using "his fame" to prompt cryptocurrencies without disclosing that he was a paid promoter of the product. He was alleged to have earned over $23.1 million in undisclosed income.

The Spanish court ultimately chose to approve McAfee's extradition on Wednesday based on charges that stemmed to his 2016, 2017 and 2018 tax returns.

After having become a prominent technology aficionado and earning millions through his security software startup McAfee Associates, McAfee went on to become a self-proclaimed "lover of women, adventure and mystery," with a dose of various arrests that took place around the world.

One of the more oddball situations that McAfee found himself unfolded in 2012, when he became the main suspect in a murder investigation in Belize. Although McAfee was never charged with a crime at the time, investigators believed that McAfee may have killed his neighbor in the Central American country after the pair engaged in a dispute over McAfee's guard dogs.

© AP Photo / Moises Castillo
Software company founder John McAfee talks to his lawyer Telesforo Guerra, right, after giving an interview at a local restaurant in Guatemala City, Tuesday, Dec. 4, 2012. McAfee, 67, has been identified as a "person of interest" in the killing of his neighbor in Belize, 52-year-old Gregory Faull. Police are urging McAffe to come in for questioning. The anti-virus company founder fled Belize and is seeking political asylum in Guatemala, according to Guerra.

In the days that followed the neighbor's death, McAfee fled Belize over beliefs that the local authorities would torture and kill him after placing the mogul in their custody. The claim, however, was later written off by former Belizean Prime Minister Dean Barrow, who deemed McAfee "bonkers."

While McAfee had no issue with boasting about his sexual exploits and distaste over the antivirus program he created, he eventually found his way back into the limelight more recently after boasting about his refusal to pay his taxes, daring the IRS to come and find him instead.

It was as prosecutors in Tennessee worked their case against McAfee that he opted to live in exile with his wife, Janice, on their yacht. However, not all was smooth sailing as McAfee was eventually detained in the Dominican Republic for carrying military-style weapons. Although he was later sent to the UK, by the time 2020 came around, McAfee found himself in the custody of Spanish authorities.