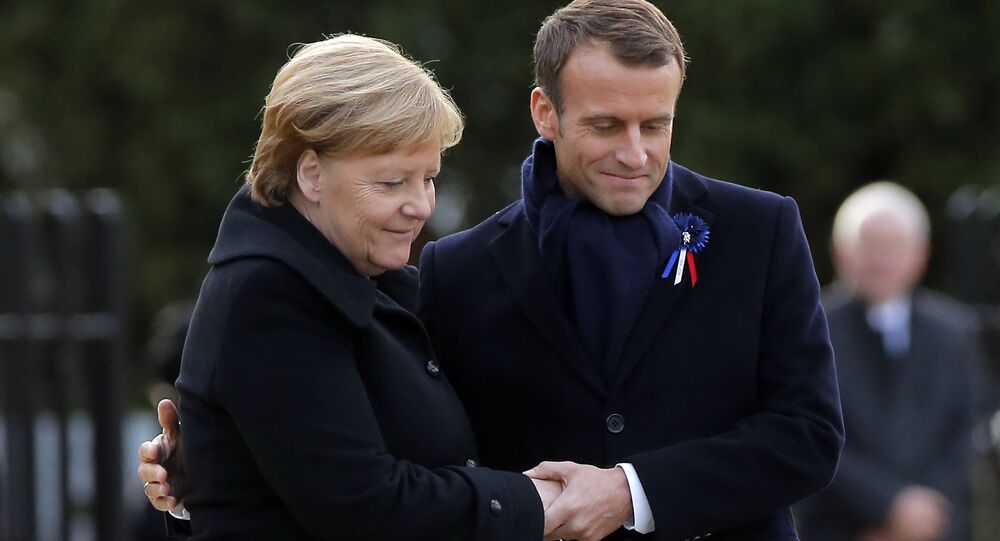 French President Emmanuel Macron has commented on reports about the US surveillance of European politicians, calling it "unacceptable".

"This is not acceptable between allies, even less between allies and European partners", Macron said at the end of a Franco-German council of ministers.

German chancellor Angela Merkel said she approved of Macron's stance on the matter.

"We discussed these things ... in relation to the NSA. Our approach to investigations has not changed since then, we rely on trusting relationships, and what was right then is true today. I am glad that the Danish government and the Minister of Defence have said very clearly what they think about this, and so I see good prerequisites, in addition to explaining the circumstances, for the transition to a trusting relationship," Merkel said.

The French President added that he is awaiting an explanation from the US and Denmark on the spying claims.

© REUTERS / POOL
French President Emmanuel Macron is seen on a video screen during a joint press conference with German Chancellor Angela Merkel, as part of a virtual Plenary Session of the Franco-German Council of Ministers in Berlin, Germany, May 31, 2021.

Earlier on Monday, Germany said it was not ready to confirm whether it will continue to cooperate with Danish intelligence agencies following the recent reports about spying on European politicians.

Norway and Sweden also have demanded explanations from Denmark following revelations of the Defence Intelligence Service's role in espionage against its neighbours.

On Sunday, Danish public broadcaster Danmarks Radio and Süddeutsche Zeitungand reported that the NSA had eavesdropped on Danish underwater internet cables from 2012 to 2014 to spy on senior politicians in Germany, Sweden, Norway, and France, including Chancellor Merkel, then-German Foreign Minister Frank-Walter Steinmeier, and Social Democratic candidate Pierre Steinbrook. According to these reports, so-called "Operation Dunhammer" allowed the NSA to eavesdrop on phones and text messages.

First, the details concerning the US intelligence's massive surveillance targeting EU top politicians were leaked to the media by US whistleblower Edward Snowden in 2013. The spying campaign reportedly continued for years, with hackers tapping through politicians' phones, including Chancellor Merkel's.