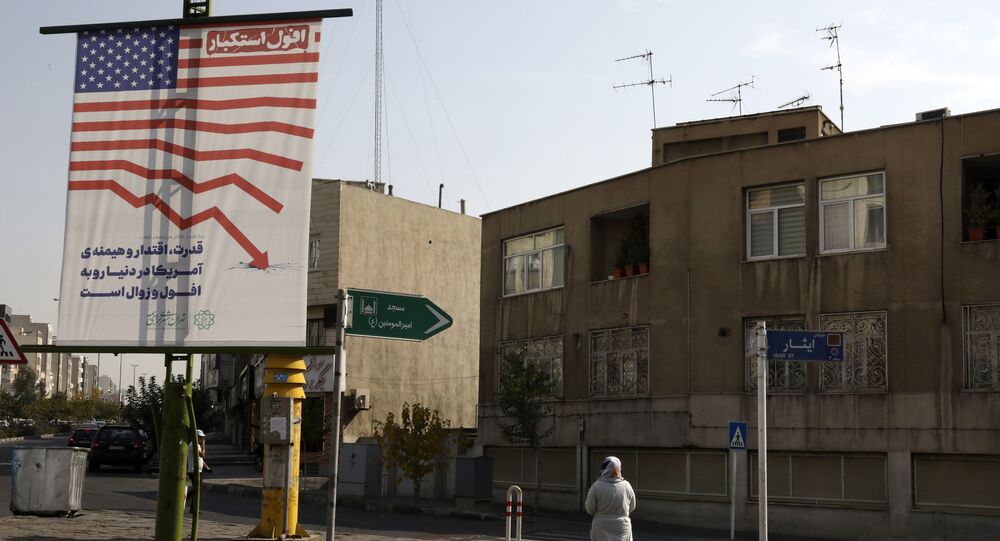 Talks are under way in Vienna to bring Washington and Tehran back into compliance with the 2015 Iran nuclear deal that was unilaterally abandoned by the US in 2018. Iran insists on the lifting of all American sanctions against the Islamic Republic, while Washington wants Tehran to stop enriching uranium beyond the agreed upon limits.

A group of US senators has warned three major business and financial groups against engaging with Iranian counterparts in case the Biden administration scraps sanctions against Tehran to rejoin the 2015 Iran nuclear deal, also known as the Joint Comprehensive Plan of Action (JCPOA).

The warning was part of a letter signed by 15 Republican senators and sent to the heads of the US Chamber of Commerce, Financial Services Forum, and Business Roundtable earlier in the week.

"Your member companies may see this potential removal of US sanctions on Iran as a lucrative opportunity. Trust us, they should not. If US sanctions on Iran were temporarily lifted and these firms decided to re-enter the Iranian market […] they would be investing in ventures doomed to fail", the letter reads.

The GOP senators described the JCPOA as a "deeply flawed agreement" that "handed Iran significant economic concessions in exchange for modest and temporary restrictions on Iran's nuclear enrichment activities".

According to them, the nuclear deal "also failed to address the threat of Iran's missile programmes and other malign activities".

"Since the JCPOA was not a legally binding instrument under US or international law, the sanctions waived in the JCPOA were re-imposed by the United States in 2018 [after Washington's unilateral exit from the deal], resulting in more than 100 international companies and organisations terminating or curtailing business with the Iranian regime to avoid US sanctions", the senators went on to note.

They expressed concern that Washington "has ambitions to toss aside the progress of the maximum pressure campaign and return to a JCPOA-like framework".

The Republicans concluded the letter by arguing that "any attempt by the Biden administration to broker a JCPOA-like deal or offer sanctions relief to the Iranian regime will be fleeting".

The remarks come a few days after dozens of Democrats lauded President Joe Biden for entering indirect talks with Iran to revive the JCPOA and urged him to lift "bad-faith sanctions" imposed by ex-POTUS Donald Trump.

The 53 state Democratic Party leaders and Democratic National Committee members claimed in a letter to Biden that such sanctions "should not be treated as a concession to Iran, but rather as an effort to restore US credibility and enhance American security".

The letter followed Iranian media reports that Tehran and Washington had reached an agreement in principle on lifting the majority of US sanctions against Iranian individuals and institutions, including the Islamic Republic's oil and banking sectors.

"Sanctions […] on Iran's energy sector, which include oil and gas, or those on the automotive industry, financial, banking and port sanctions, all should be lifted based on agreements reached so far", Deputy Foreign Minister Abbas Araghchi, Iran's top nuclear negotiator at the Vienna talks, was quoted by the Fars news agency as saying.

Negotiations are currently ongoing in the Austrian capital between Iran and the remaining signatories to the JCPOA on how to bring the US and Iran back to the nuclear deal.

The Biden administration has repeatedly signalled its readiness to re-enter the JCPOA, adding that it is Iran who should be the first to comply with the agreement. The Islamic Republic, for its part, insists that the ball is in the US court, urging Washington to lift all its anti-Iranian sanctions.

© AFP 2021 / JOE RAEDLE
Pompeo Touts ‘Toughest' GOP Sanctions Bill on Iran Amid Signs of Tentative Progress at Vienna Talks
On 8 May 2018, Trump announced Washington's unilateral withdrawal from the nuclear deal and began re-imposing harsh economic sanctions on Iran, who retaliated by starting to gradually abandon its own JCPOA commitments a year later.

Iran signed the nuclear agreement with the P5+1 group of countries, including Russia, the US, the UK, China, France plus Germany, in 2015.  The deal required Iran to scale back its nuclear programme and downgrade its uranium reserves in exchange for sanctions relief.