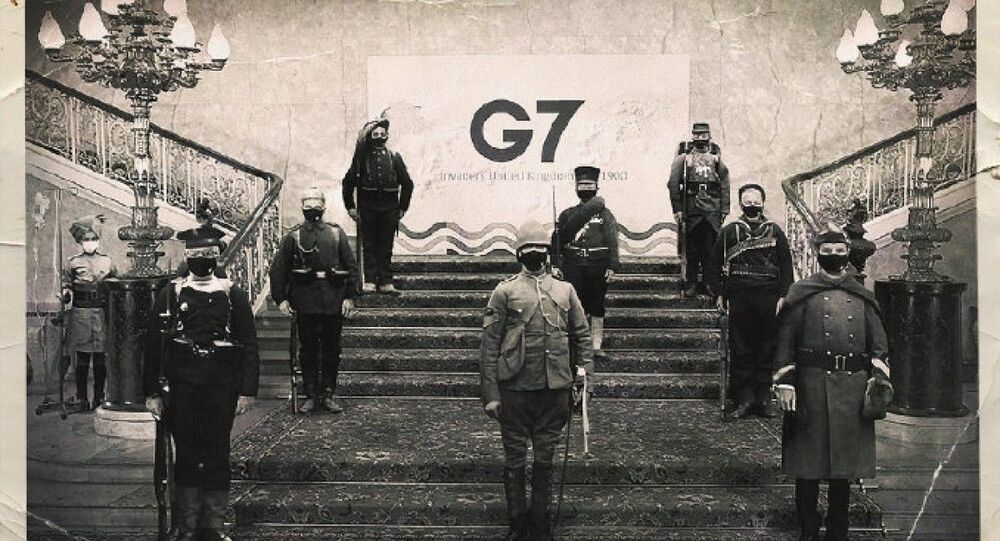 Between 1842 and 1949, China was forced to accept a series of unequal treaties that opened the country to foreign traders, causing huge volumes of wealth to flow from China to Europe, Japan, and the US. By contrast, the socialist era that began in 1949 has been presented as the end to foreign domination and the resumption of socioeconomic progress.

After the Group of 7 (G7) issued a statement Wednesday labeling China and Russia as “threats,” a Chinese artist has crafted a satirical take on a photo the G7 foreign ministers posed for. The image shows them in turn-of-the-century garb as the powers who invaded China to crush the 1899-1901 Boxer Rebellion and impose their collective will on the late Qing Dynasty.

"The last time when these guys colluded to [suppress] China was still in 1900,” Chinese cartoonist Wuheqilin posted on his Weibo account on Friday. “120 years have passed, they are still dreaming.”

Wuheqilin
"Invaders United Kingdom 1900," a satirical take by Chinese artist Wuheqilin on a May 4 photo of the G7 foreign ministers. The eight figures are recast as the eight powers who invaded China in 1900 to crush the nationalist Yihetuan Movement.

According to the Global Times, the image isn’t just a digital alteration, but painted. It shows the members of the Eight-Nation Alliance who formed an international army to invade China and crush an anti-Western rebellion in 1900. The text on the wall that said "United Kingdom 2021” in the May 4 photo has been replaced with "Invaders United Kingdom 1900."

Wuheqilin added another character, though: the Indian soldier in the left-hand corner, holding an IV drip. This was to symbolize India’s invitation to the G7 and the COVID-19 scare that happened among India’s delegation, as well as the catastrophic explosion of COVID-19 cases in the country over the last few weeks.

The People’s Republic of China, founded in 1949, has prided itself on ending what it calls the “Century of Humiliation” that began with the Opium War, and has presented the socialist era as one of China beginning to develop itself socially and economically instead of being slowed or halted by the domination of foreign powers.

At the summit in London, the ministers discussed a number of geopolitical topics, including the situations in Myanmar and Ethiopia, but mostly focused on Russia and China, which UK Foreign Secretary Dominic Raab characterized as “rising threats.”

“This is gross interference in China's sovereignty, flagrant trampling on norms of international relations and violation of the trend for peace, development and win-win cooperation of our times,” Wang said. “China strongly condemns it.”

Called the Boxer Rebellion in the West, the Yihetuan (Righteous and Harmonious Fists) Movement was a reaction to the growing encroachments by Western imperial powers on Chinese sovereignty. Sixty years earlier, the UK defeated Qing Dynasty China in the First Opium War, forcing Beijing to loosen its rules on trading with foreign powers. Subsequent wars in which tens of millions of Chinese died eventually imposed free trade on the vast majority of China, and permitted Christian missionaries to evangelize among the Chinese population.

Yihetuan, a traditional and previously reclusive marital arts society, took on an increasingly political stance against this and in the late 19th century began killing Christian missionaries, rallying around the Qing government and laying siege to the Legation Quarter in Beijing, where envoys from the imperial powers were stationed. Amid the chaos, the Empress Dowager Cixi seized control of the government from the young and pliant Guangxu Emperor and declared war on the western powers, who sent a combined army of 20,000 men to attack Beijing and destroy the Yihetuan.

German Kaiser Wilhem II, who was part of the alliance, infamously told his troops on the eve of their departure for China: “Should you encounter the enemy, he will be defeated! No quarter will be given! Prisoners will not be taken! Whoever falls into your hands is forfeited. Just as a thousand years ago the Huns under their King Attila made a name for themselves, one that even today makes them seem mighty in history and legend, may the name German be affirmed by you in such a way in China that no Chinese will ever again dare to look cross-eyed at a German.”

The eight nations of the alliance in addition to Germany were the UK, France, Japan, Italy, Austria-Hungary, the US, and Russia - the G7 today, having kicked Russia out of the G8, are composed of the same nations except for Austria-Hungary, which has been replaced by Canada.

After breaking the siege, the international army looted Beijing and the surrounding countryside, massacring thousands of Chinese, and imposed harsh indemnities on the government, including a payment of 18,500 tons of silver and accepting the stationing of Western troops in Chinese cities. The monarchy was overthrown just 11 years later and a republic was declared, but the right of the eight nations to meddle in Chinese affairs did not end until 1949, when the republic was overthrown everywhere in China except Taiwan by a socialist revolution led by Mao Zedong.