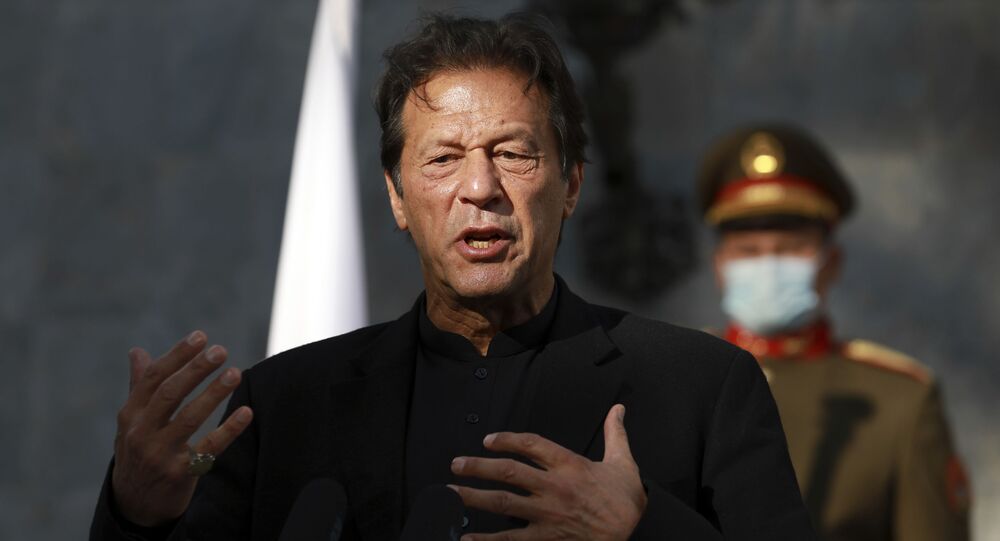 Imran Khan has demanded that those taking jabs at Islam, under the pretext, as he said, of freedom of expression, apologise. Yet, days earlier, the Pakistani government banned its Tehreek-i-Labbaik Pakistan party, which has of late staged multiple protests against what they claimed to be anti-Islamic sentiment in the West.

Pakistani Prime Minister Imran Khan has called western governments to “penalise those deliberately spreading their message of hate against Muslims” or showing disrespect for Prophet Muhammad, in a way similar to how they had “outlawed any negative comments against the Holocaust”.

Dwelling on the “extremists” who he tweeted are out to hurt the 1.3 billion Muslims’ feelings by insulting them under the guise of freedom of speech, Khan said they “clearly lack moral sense and courage” to issue their apologies. He went on to demand that they publicly do this.

Earlier this week, members of the party Tehreek-i-Labbaik Pakistan (TLP) took to the streets across the country, especially in Punjab, to protest against what they claim are anti-Muslim attacks, demanding the expulsion of the French ambassador to Pakistan. The latter came in response to the French authorities stepping up anti-terrorism legislation, which would stipulate harsher punishment for Islamism.

From Charlie Hebdo to Muslim Protests

In September 2020, French caricature magazine Charlie Hebdo moved to republish sketches of Prophet Muhammad, amid a steadfast belief among practicing Muslims that their prophet must not be visually represented in religious settings. In October, a history teacher who had shown the sketches in class was decapitated, with his murderer shot dead by French police as they tried to arrest him.

Following the killing, French President Emmanuel Macron lashed out at Islamists and vowed not to "give up cartoons" depicting Prophet Muhammad, for the sake of freedom of speech and expression. Prime Minister Imran Khan as well as other leaders of Muslim countries condemned the French prime minister’s comments, while protests were held around the Muslim world calling for a boycott of French produce.

TLP members were among the groups that led these protests in Pakistan, reaching a deal with the government over the expulsion of the French ambassador within three months, first by 17 February, with the deadline then pushed further.

The government also was to release all the arrested workers of the TLP, with no case registered against them, according to the initial agreement. Before it was presented in parliament for consideration, the authorities moved to arrest TLP head Saad Hussain Rizvi as a "pre-emptive measure", sparking new protests in the Muslim country.

After the latest round of street violence, which saw the protesters clash with police, the government slapped a ban on the party.