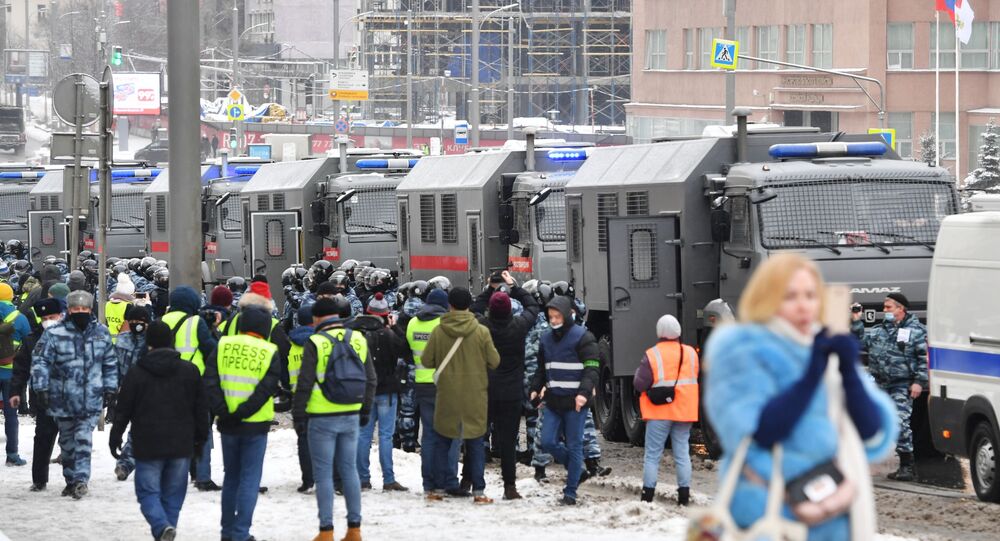 Supporters of detained opposition vlogger Alexei Navalny took to the streets for the second week in a row on Sunday. Navalny returned to Moscow earlier this month and placed in detention for repeated violations of the terms of his probation following conviction for fraud and money laundering in 2013.

"The US's flagrant interference in Russia's internal affairs is just as much a proven fact as the hyping of fakes and calls for unauthorised protests by Washington-controlled online platforms. Secretary of State Antony Blinken's support for the violation of [Russian] laws is another confirmation of Washington's behind-the-scenes role," the ministry said in a statement Sunday.

The Foreign Ministry went on to accuse Washington of following the playbook of a scenario created by the RAND Corporation in 2019, and of "encouraging protests" as part of its strategy of "containing" Russia.

Earlier Sunday, Blinken issued a tweet condemning "the persistent use of harsh tactics against peaceful protesters and journalists by Russian authorities" during Sunday's rallies, and called on Moscow to "release those detained for exercising their human rights," including Navalny.

The U.S. condemns the persistent use of harsh tactics against peaceful protesters and journalists by Russian authorities for a second week straight. We renew our call for Russia to release those detained for exercising their human rights, including Aleksey Navalny.

Along with Blinken, the account of the US Embassy in Russia has been tweeting a stream of tweets on the protests, accusing Russian authorities of "detaining activists, journalists and blocking off the centre of Moscow" and calling on the Russian state to "comply with its international obligations in the area of human rights."

Last week, the US Embassy appeared to help coordinate the protests by publishing maps with proposed routes that demonstrators would be taking. On Saturday, US Ambassador John Sullivan claimed that the information was published to ensure the safety of US citizens in the country, and called the Embassy's actions "common diplomatic practice."

© Sputnik / Ilya Pitalev
Live Updates: Up to 2,000, Including Journalists, Attend Unauthorised Rally in Moscow
A total of 3,254 protesters were detained, among them over 520 people in Moscow, by mid-day Sunday. The unauthorised rallies have reportedly remained mostly peaceful, although a police van caught fire in Moscow, and a riot police officer was injured in St. Petersburg. Injuries have yet to be reported among protesters.

Alexei Navalny returned to Russia from Germany on 17 January, where he was immediately placed under arrest for 30 days for violating the terms of his probation over a 2013 conviction for embezzlement. The opposition vlogger, known in Russia for making videos investigating alleged corruption by Russian businessmen and politicians, was taken to Germany in a comatose state last August after falling ill during a domestic flight from one Siberian city to another. His supporters almost immediately accused Moscow of trying to poison him with a military-grade nerve agent. Russian authorities vehemently denied these claims, and pointed out that local doctors saved his life after he fell ill, and that the government allowed him to leave the country and be flown to Berlin for treatment, in accordance with the wishes of his family.