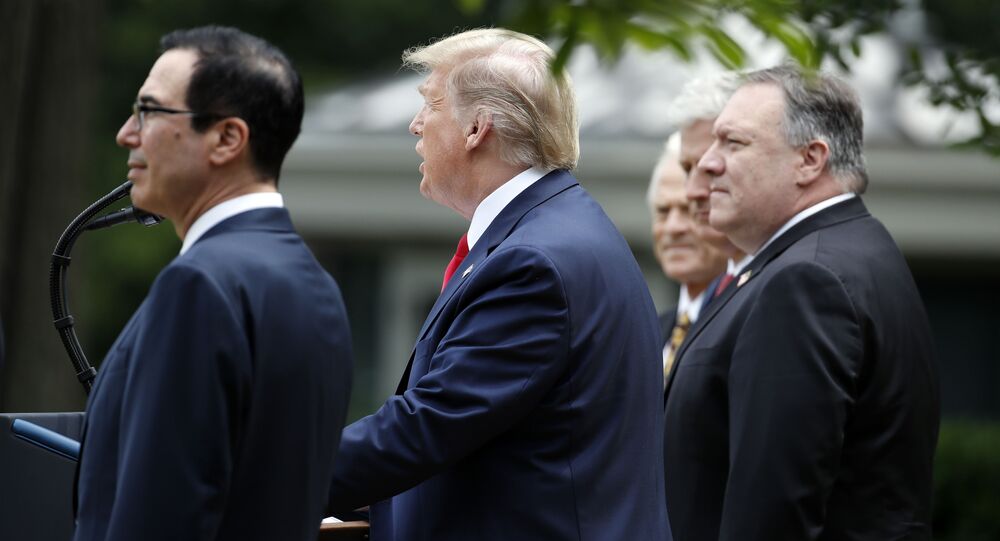 During Donald Trump's final weeks in the Oval Office, his administration has hit Iran with an avalanche of new restrictions, most recently against dozens of individuals and business entities, both local and foreign enterprises, working in a variety of spheres – from mining to defence.

The blacklisting of 10 senior US officials, including POTUS Trump, is because of their "role and involvement in terrorist and anti-human rights actions against the Islamic Republic of Iran and Iranian citizens", the ministry's spokesman Saeed Khatibzadeh said, as quoted by journalist Abas Aslani.

The move came in response to the Trump administration's latest wave of sanctions during the president’s final days in office, with Washington recently bombarding Iran with restrictions, namely against dozens of individuals and entities, ranging from Iranian officials, companies, and organisations, to foreign firms and businesses operating in mining, steelmaking, shipping, and defence.

Last week, the US State Department announced a new round of sanctions against a host of Iranian defence entities over the “proliferation” of conventional weapons abroad, while also taking aim at companies and persons from China and the United Arab Emirates over the sale of steel products to Iran and associating with the Islamic Republic of Iran Shipping Lines.

In December, there were two more rounds of sanctions against Tehran, which came as part of a sanctions war that the sides have been waging against each other since Washington unilaterally withdrew from the JCPOA deal in May 2018. The accord stipulated the easing of economic sanctions against Iran in exchange for the Islamic Republic's commitment to "not engage in production of uranium metal or conducting research and development on uranium metallurgy for 15 years".

Iranian authorities have on more than one occasion denounced Washington's tough stance on the country, with Foreign Minister Mohammad Javad Zarif blasting the sanctions policy as “lawless bullying”, and stressing repeatedly that Tehran cannot be forced into submission.