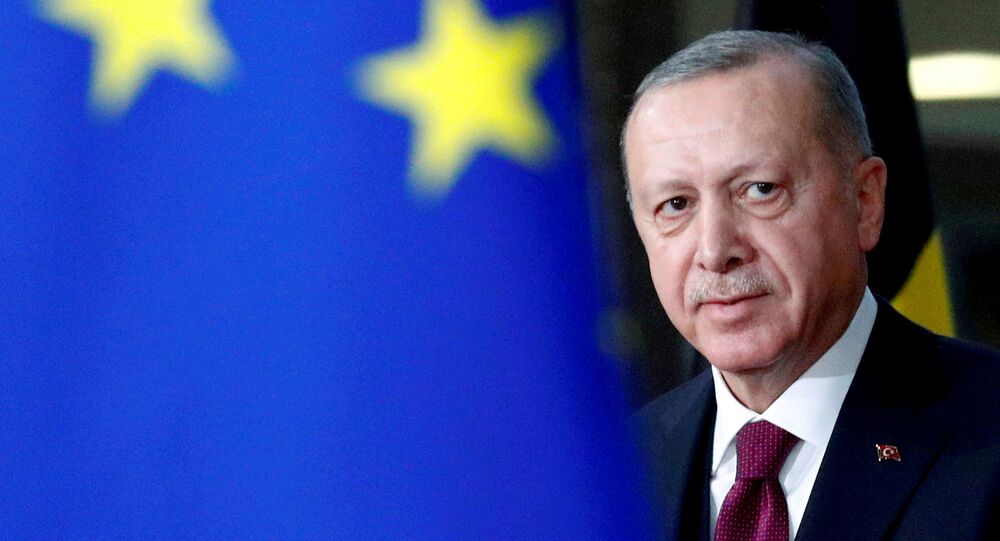 Turkey’s gas exploration activities in the East Mediterranean remain one of the main stumbling blocks in Ankara’s relations with EU members France and Greece.

Turkish President Recep Tayyip Erdogan has signalled Ankara’s readiness to improve relations with the EU, including the bloc’s members Greece and France.

“We are ready to put our relations back on track. We expect our European friends to show the same goodwill”, Erdogan said during a meeting with EU ambassadors in the Turkish capital on Tuesday.

He referred to the so-called “exploratory talks” between Athens and Ankara due on 25 January, which were earlier agreed by both sides to address their longstanding dispute over maritime borders.

The situation further deteriorated last year, when Turkey sent its Oruc Reis ship, accompanied by a fleet of military vessels, to drill in what Greece considers its continental shelf.

During the Tuesday gathering, Erdogan also made it clear that he was open to bolstering Ankara’s ties with Paris after months of a personal feud with French President Emmanuel Macron.

“We want to save our relations with France from tensions”, the Turkish president underscored.

In late October 2020, Paris recalled its ambassador to Turkey after Erdogan said that Macron had to undergo "mental checks" because of his treatment of "millions of members" of France's Muslim community.

The comments came after Macron called Islam a religion "in crisis", directing the French government to come up with new legislation to bolster a 1905 law separating church and state in the country.

He also refused to denounce the cartoons of the Prophet Muhammad and pledged to continue defending civil liberties in the wake of the beheading of a school teacher outside the French capital. French history teacher Samuel Paty was decapitated by an 18-year-old man of Chechen origin for showing caricatures of the Prophet Muhammad to schoolchildren in a Paris suburb.

© REUTERS / Jean-Paul Pelissier
Mediterranean Crisis: Turkey Slams ‘Imperialist’ France Over Syria-Style ‘Red Lines’
Separately, Paris and Ankara remain at odds over a spate of sensitive issues, such as Nagorno-Karabakh and Turkey’s oil and gas exploration in the Mediterranean.

Last year, Erdogan cautioned Athens and Paris against trying to stop Ankara from carrying out its drilling activities in the region, warning that unlike Greece and France, Turkey was “determined to pay any price” to defend its interests.

On the situation in Nagorno-Karabakh, Ankara stressed in 2020 that it was ready to support Baku "both in negotiations and in combat", suggesting that an attack on Azerbaijan equals an offensive against its ally Turkey. France insisted at the time that Turkey should stop any kind of provocations regarding the Armenian-Azerbaijani conflict over Nagorno-Karabakh.