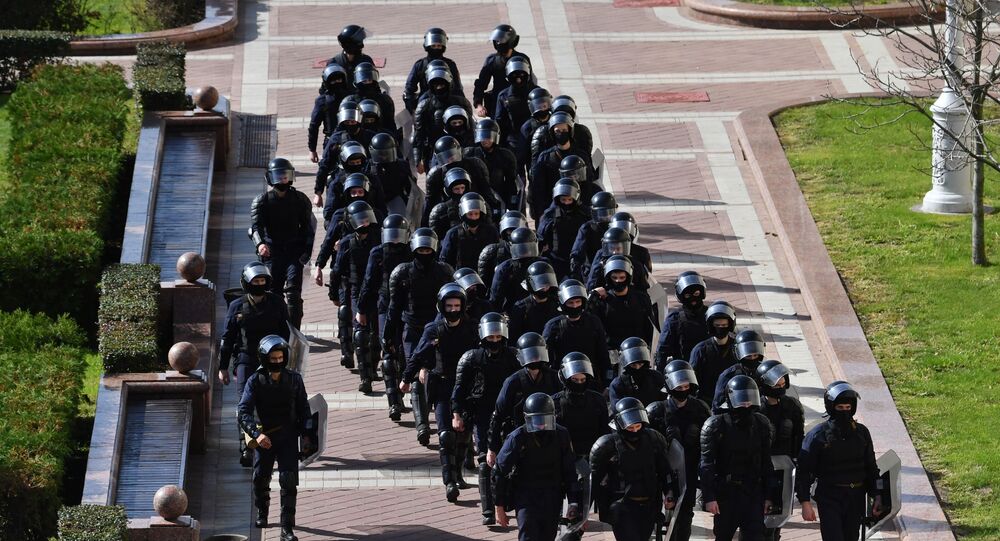 Police have detained around 100 people attending unauthorised anti-government demonstrations in the Belarusian capital, the police department of the Minsk City Executive Committee said on Sunday.

"Today, on 20 December, scattered groups of citizens attempted to gather in different parts of the capital city, marking themselves with unregistered symbols and placards containing various calls. The participants of unauthorised events were repeatedly warned about the inadmissibility of unlawful actions, after which the most active individuals were detained — around 100 citizens, who are currently being probed in line with the law", the police said in a press release on Telegram.

Earlier in the day, Natallya Hanusevich, a spokeswoman for the Minsk police, confirmed to Sputnik that multiple people had been detained during the anti-government demonstrations, but did not specify numbers.

As reported by a Sputnik correspondent from Minsk, a large rally began in the Grushevka outskirt around noon local time (09:00 GMT). People carried signature red-and-white-coloured tokens and yelled anti-government slogans. The rally moved predominantly locally from yard to yard.

Police arrived at the site in several buses shortly into the start, prompting the protesters to run and hide in nearby yards.  Several more demonstrations were held in other residential districts of Minsk.

© AP Photo
Belarusian women with umbrellas in the colors of the old Belarusian national flag attend an opposition rally to protest the official presidential election results in Minsk, Belarus, Saturday, Oct. 17, 2020. More then one hundred women marched through the Belarusian capital on Saturday to protest against political repressions and demand a new election. Several participants in the rally were detained.

The police official urged citizens to "not succumb to provocations disseminated via various social networks and messengers with calls to participate in unauthorised events" and stressed that countering public disorder is "a responsibility, not a right" of law enforcement officers.

According to Minsk-based human rights centre Viasna, which tracks the confirmed detentions weekly in a spreadsheet on its website, 18 people were detained this Sunday so far, most of them in Minsk.

Marches on weekends have become a signature feature of the post-electoral protests in Belarus. Sunday rallies are traditionally the largest, held in Minsk and other cities and normally resulting in multiple arrests. Details on time and place are normally being communicated to people via opposition-backed Telegram channels.

© AP Photo
Belarusian opposition supporters rally in the center of Minsk, Belarus, Sunday, Aug. 23, 2020. A vast demonstration with many thousands of protesters demanding the resignation of Belarus' authoritarian president are rallying in the capital, continuing the public dissent since the disputed presidential election.

Mass protests began in Belarus after the presidential election on August 9, which, according to the official results, incumbent President Alexander Lukashenko won by a landslide, securing himself a sixth consecutive term in office. The opposition refused to recognise the results, claiming electoral fraud.

Over the past few weeks, the format of opposition protests in Minsk has changed — instead of calling one massive rally across the city centre, protesters gather for smaller demonstrations scattered across the city's residential areas. Police and security forces with special equipment are normally being deployed to these spots in the morning of the protest day.