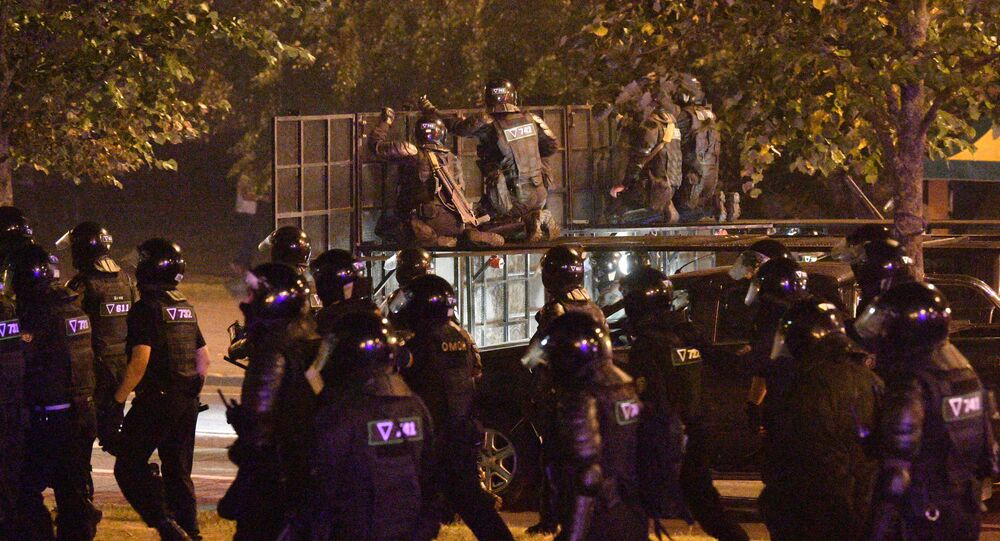 The tear gas was used against anti-government demonstrators who gathered in a line near the Pushkinkaya metro station. Local opposition-minded telegram channels and media outlets have shared videos from eyewitnesses, which show protesters running away from security forces after the latter used tear gas.

Earlier in the day, a Sputnik correspondent reported that a few hundred people gathered at Pushkinskaya, and the police detained several dozen protesters.

Minsk police spokeswoman Natalia Ganusevich confirmed to Sputnik that security officers have made detentions, but did not reveal how many.

"There are detained participants of an unauthorised mass gathering", Ganusevich said.

Meanwhile, the non-governmental human rights centre Viasna said that over 100 protesters have been arrested across Belarus during opposition rallies on Sunday and published a list of their names on its website. Viasna regularly updates the number of detainees, which currently includes 140 names.

© REUTERS / STRINGER
An opposition supporter argues with a police officer during an opposition rally to reject the presidential election results in Minsk, Belarus October 4, 2020.

Belarus has been facing massive opposition protests following the presidential election on 9 August that saw President Alexander Lukashenko reelected for a sixth term.

While electoral authorities maintain that Lukashenko collected over 80 percent of the vote, the opposition insists that his main contender, Svetlana Tikhanovskaya, won the election. Opposition figures also accuse the security forces of resorting to excessive violence during the protests. Protests continue to this day, the largest - on weekends.