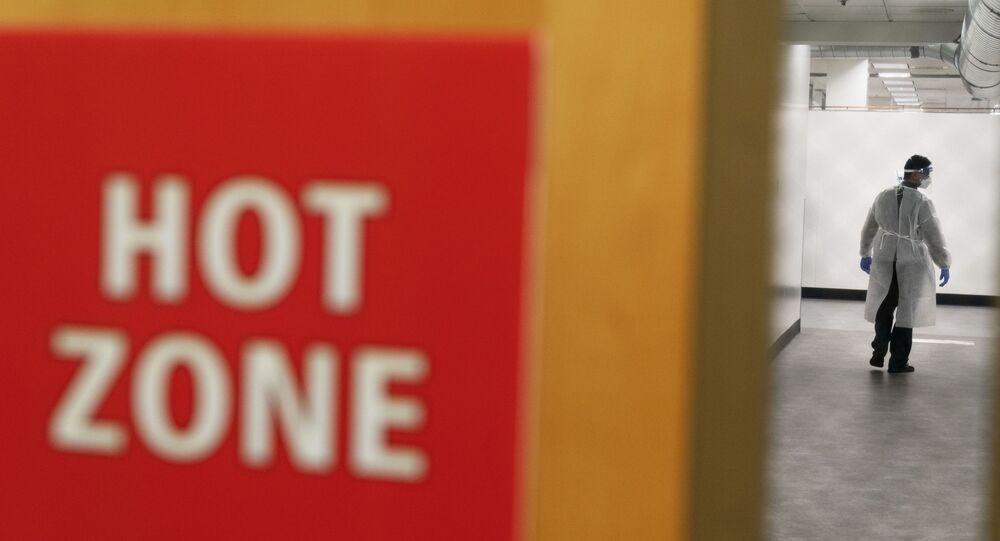 The sobering milestone of 300,000 COVID-19 deaths in the US, more than all US soldiers killed in combat in World War II, was passed on Monday. However, US leadership has remained critical not of its own failures, but of invented failures by China, which they blame for failing to contain the illness.

By Tuesday, 302,300 Americans had died from COVID-19 and at least 16.6 million had been infected by the virus, according to data collected by the New York Times. Data from the US Centers for Disease Control and Prevention shows the seven-day moving average for daily new cases stands at 213,537.

By contrast, China reported 17 new cases of COVID-19 on Monday and has only recorded a grand total of 86,758 cases, with 4,634 people dying of the illness. Nearly all of those cases and deaths occurred in the first quarter of 2020, when COVID-19 initially broke out in Wuhan, the metropolis at the center of China’s Hubei Province.

However, what if these situations were reversed, and it was China that was suffering the catastrophic effects of a badly mismanaged pandemic that had killed close to one-third of a million people? That’s the question asked by the editorial staff of the Global Times in a Tuesday op-ed.

Onslaught Would Be ‘Beyond Imagination’

“The situation would definitely be much worse than what happened in January and February when the epidemic broke out in Wuhan. China would become an absolute target of Western public opinion, and the pressure on China would not only be at the public opinion level,” they noted.

“If 300,000 people died in China from the coronavirus, the intense Western onslaught on China would be beyond imagination.”

The Times predicted the US and other Western nations would offer humanitarian assistance, “but such sympathy will not extend to the political realm.” Instead, they would pursue investigations aimed at exposing the “underlying causes” of the outbreak and China’s inability to halt it.

“First, they would stress that this is a huge humanitarian disaster in China - not a natural disaster, but a man-made one,” Global Times wrote, noting similar claims about the 1986 Chernobyl nuclear disaster had helped influence the collapse of the USSR.

The paper predicted that Western nations would use the mass death to cast Beijing as indifferent to human life and say this indifference comes from its so-called authoritarian system, contrasting it to the West’s respect and value for all human lives.

Any sort of political or social turmoil that arose during the pandemic in China would be labeled by the West as a symptom of its morbid culture and system, they said, and if things got bad enough, they might even launch a military offensive to capitalize on China’s moment of historic weakness, doing in the socialist rival for good.

“In short, if China were the country with the worst response and greatest loss in the global disaster, the US and the West would have launched a tsunami-level ideological attack against China. The attack will extend to other areas and lead to a major and long-term confrontation. Fortunately, the actual situation is the opposite. However, the possible fierce attacks by the US on China did not become its self-reflection. Some of them have really happened in their own countries,” the Times’ editors wrote.

However, back here in the real world, the pressure on China by Washington in response to the COVID-19 pandemic is already extremely high. As early as April, US President Donald Trump said it seemed China’s official case and death numbers were “a little bit on the light side,” suggesting without evidence that Beijing was lying to conceal a much greater spread of the disease than it was telling the world.

The following month, Trump pulled the US out of the World Health Organization, claiming the UN agency was dominated by China and had allowed itself to be bamboozled by China’s claims about the novel coronavirus. This, Trump said, had caused the virus to spread to the rest of the globe, including the US, which greeted the pandemic with a flat-footed response. By that time, more than 100,000 Americans had died of COVID-19.

Then, at the United Nations General Assembly in September, Trump raged about “the China virus,” a term he adopted in news conferences and campaign rallies over the course of the year that helped inspire racist attacks on Chinese-Americans. By the time of the annual New York conference, more than 200,000 Americans had died of COVID-19.

On December 8, the world commemorated the first anniversary of the first known COVID-19 cases being discovered. However, the disease was not identified as a unique illness from other related coronaviruses until January 12, when Chinese authorities sequenced SARS-CoV-2, the virus that causes COVID-19, realizing it was not SARS-CoV-1, a respiratory illness that killed 774 people between 2002 and 2004.