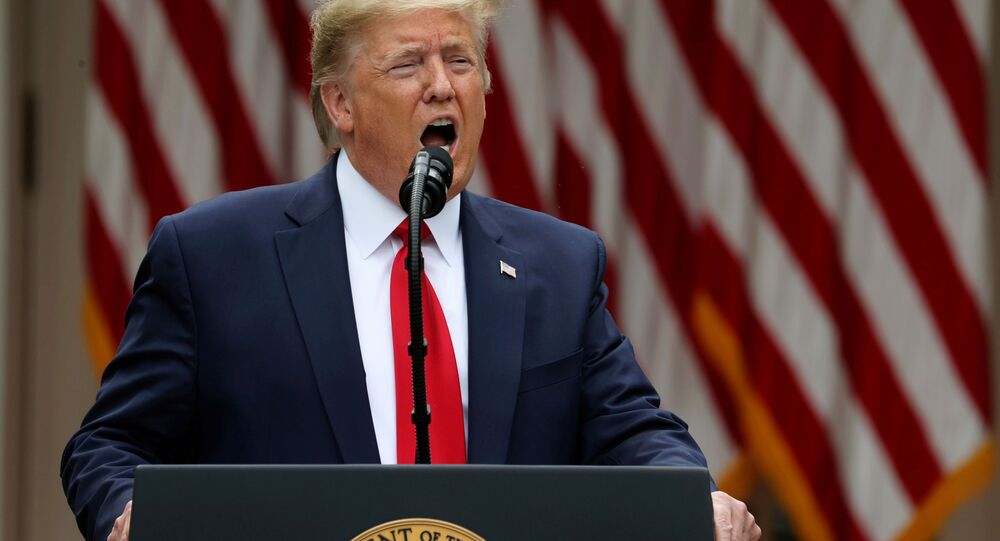 Search for Better Alternative or Political Play? What's Behind US Decision to Cut Ties With WHO

While the White House insists that ties were broken with the global health body due to its alleged incompetence in containing the outbreak of the coronavirus, some experts suggest that there could be more to Washington’s motivations than meets the eye.

US President Donald Trump announced on 29 May that his country would be terminating its membership in the World Health Organisation (WHO), citing a lack of the reforms that Washington demanded to see carried out in the international organisation.

Prior to the announcement, Politico reported that the US was planning to replace the WHO's function with domestic institutions under the leadership of the Department of State. However, some scholars are sceptical about the prospects of such an endeavour, while others are considering the possibility that the withdrawal from the WHO really only serves political purposes.

Can the Department of State Replace the Entire WHO?

Putting aside Washington's accusations of the WHO allegedly conspiring with China, which were poorly substantiated, it's a fact that the pandemic has managed to spread across almost the entire world, infect some six million people, and kill over 367,000. Dr Waheed Uddin, a professor, consultant, and former UN expert, strongly believes that this is a direct result of the WHO's actions.

He accuses the global health body of failing to alert people in time of COVID-19's ability to transfer between humans and announce a full-fledged pandemic, as well as discouraging bans on international travel during the early stages of the outbreak. Uddin argues that by failing at these crucial tasks, the WHO inflicted major damage on the world and that the US was right to ditch the organisation.

"The disservice to the world by the WHO literally destroyed the economies of the most affected countries. The unfortunate consequence of appropriate inactions by the WHO and late declaration of the COVID-19 pandemic has made it the worst epidemic disaster in 2020 since the Spanish Flu epidemic", the professor says.

Uddin went on to suggest that the reported initiative to replace the WHO might become a viable and more effective alternative to Washington's membership in the organisation. However, Professor Kelley Lee, research chair in Global Health Governance at Simon Fraser University in Burnaby, Canada, disagrees with this notion.

Lee sees several implications for the US in light of ditching its seat at the WHO. For starters, Washington will now be left out of the Solidarity Trials initiative that unites scientists from all over the world to develop a vaccine against COVID-19, and thus will not receive the results of the initiative's work - a functional and safe vaccine, the professor says. She adds that the protocols that frontline medics fighting the coronavirus are using right now were developed by the WHO and thus Washington will not be receiving new instructions that would help save lives of both patients and doctors in the future.

"WHO have expert committees which gather evidence from all countries, review and verify this evidence, and issue standardised diagnostic and clinical guidelines. No government has the capacity to do this on their own", Lee explains.

The professor from Simon Fraser University stresses that the benefits of being a member of the WHO extend beyond fighting the coronavirus. The global health body owns the largest disease surveillance network, monitoring the outbreaks in its 194 member-states through National Focal Points. Lee doubts that the US will be able to organise a network with a similar capacity on its own. She adds that American research institutions are also likely to lose access to disease research data that is acquired worldwide and freely shared among WHO members.

At the same time, the US' withdrawal is likely to hit global health efforts hard, as the country was responsible for around 15% of the WHO's funding, Professor Sunil S. Poshakwale from Cranfield University believes. He indicates that developing countries will be the primary victims of the US and China's political standoff, which allegedly resulted in Washington's split with the WHO.

"The lack of contributions from the US would adversely impact lower income countries with weaker healthcare system. These countries receive maximum support from WHO through their immunisation and disease prevention programmes. The low income countries in Africa and [the] Middle East stand to lose most. The political fallout with China is going to have [a] devastating impact on [the] health of a significant population of the world", Poshakwale says.

At the same time, the professor alleges that the US might launch programmes similar to those of the WHO itself, although the White House will now be determining who gets the help and who does not.

Despite Trump's declared reasons for leaving the WHO being its alleged reluctance to carry out reforms (something that the body actually agreed to do) and refusal to distance itself from China (in a manner that is anyone's guess but Trump's), health and policy experts suggest that the real reason for the move might be political in nature.

Doug Wead, an American political analyst and New York Times bestselling author, who has also served as an adviser to two US presidents, believes that the move reflects Trump's emphasis on 'America First', which, according to him, is often misunderstood around the world.

"He recognises that each country, including Russia, should put its own interests first and that each can understand the other better and deal with them easier if that motive is recognised. Trump's efforts to defund the World Health Organization is supported by many Americans who see them as not science-based but a political tool of the Communist Chinese government", Wead says.

© CC BY 4.0 / nursetogether / WHO World Health Organization website on Coronavirus pandemic COVID-19
Trump ‘Does Have a Point’ While Criticising WHO, German Health Minister Says
Professor Kelley Lee, in turn, points out that each time the White House presented the WHO with a new ultimatum (such as conducting reforms or alienating China), it violated its own self-imposed deadlines and announced a new round of reducing ties with the global health body. No efforts by the latter were able to prevent Washington from going down this path, the scholar notes.

She concludes that these ultimatums were never of any real interest to the administration, which was simply looking for an excuse to appoint a scapegoat responsible for the pandemic and withdraw from the WHO. Both of these might play into Trump's hands in the current election cycle, the professor suggests.

"This makes me think that this has nothing to do with WHO or even China. This has to do with the looming election and domestic politics. This suggests an increasing urgency by the Administration to explain why over 100,000 Americans have died on President Trump’s watch", Lee says.

The pandemic came as a shock to the Trump administration, which "dropped the ball from the beginning", Thomas Whalen, associate professor of Social Sciences with Boston University, adds. Now the POTUS is forced to look for "political cover" and the WHO has become the most fitting scapegoat for him, Whalen notes. The break with the global health body might fool some people in the US, but it will not fool anyone outside the country, the professor elucidates.

Carol Shoshkes Reiss, a professor of Biology and Neural Science at New York University, believes that this is not the time for the United States to leave the WHO — on the contrary, "it is time to not only provide more resources to the WHO, but for the USA to enhance and deploy the previous teams of US scientists and epidemiologists, who have provided scientific and medical intelligence and advise on the ground in many countries".

"It is time to renew cooperation and for transparent sharing of information and resources. These reciprocal cooperative partnerships should include all countries, ranging from Russia and China to European Union members, Democratic Republic of the Congo, Israel, India, and Brazil (for example)", Reiss explains.

EU Calls on US to Reconsider Withdrawal From WHO